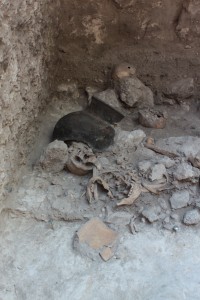 A 1700-year-old mass grave holding the dismembered and decapitated remains of 24 people has been discovered in the ancient Mayan site of Uxul. Researchers from the University of Bonn were exploring the Mayan drinking water system when they came across a 344-square-foot artificial cave that had been used as a reservoir just before it was converted into a charnel house. The floor of the cave was completely clean from when it held drinking water to supply the city during the dry season.

“Aside from the large number of interred individuals, it already became apparent during the excavation that the skeletons were no longer in their original anatomical articulation”, says the archaeologist Nicolaus Seefeld, who studied the sophisticated water supply system of Uxul for his doctoral thesis and discovered the mass grave. All of the skulls were lying scattered around the interior of the cave, in no relation to the rest of the bodies. Even the majority of the lower jaws were separated from the heads. In contrast, detailed examination determined that the limbs of the legs and hands were in some cases completely preserved. “This observation excluded the possibility that this mass grave was a so-called secondary burial, in which the bones of the deceased are placed at a new location”, says Nicolaus Seefeld.

By “completely preserved” he means that some sets of legs, feet, hands and arms were found still fully articulated. That would not have been possible if the bones had initially been buried elsewhere and then moved to the cave. The articulated remains suggest that the deceased were killed all at once rather than over time, and then dismembered and placed in the reservoir.

The body parts were scattered around the space and then covered with coarse gravel and a sealing layer of clay. This burial method kept the bones in excellent condition. Because of the fine state of preservation, osteological analysis was able to identify the sex and age of 15 of the 24 sets of remains. There were 13 men and two women ranging in age from 18 to 42 when they died. Evidence of violence — hatched marks on the vertebra from decapitation, unhealed skull fractures from a blunt instrument, a number of cutting marks, possibly from stone hatchets, on many of skulls. 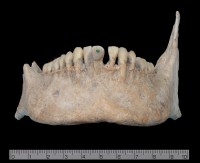 Some of the teeth had jade inserts, an indicator of high social status, but others showed signs of the long-term malnutrition and tooth decay that tend to afflict the poor. Archaeologists have not yet been able to determine if the dead were residents of Uxul or if they were victims of a war with a competing Maya city. The elite of Uxul weren’t in a good place in the seventh century when the mass grave was filled. The city was conquered and absorbed by my favorite Mayan dynasty, the Snake Lords of Calakmul, during this time. The local nobles were stripped of their titles and replaced with Snake Lord allies. Perhaps some of them were diced up and tossed in a dry reservoir too.

Stable isotope analysis of the enamel and dentine of the teeth might be able to answer that question. Isotopes like oxygen, strontium, lead, carbon and nitrogen become fixed in the teeth when they develop in childhood in percentages and combinations that are unique to a given area. By analyzing the teeth for the presence of stable isotopes, scientists can discover a great deal about the diet and movements of the teeth owners in their youth.

As it stands, the mass grave is strong evidence that the Maya dismembered their prisoners and/or enemies, something depicted often in Mayan art but rarely found in the archaeological record.

One thought on “Mass grave of dismembered bodies found at Uxul”