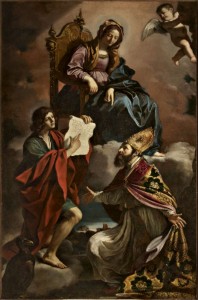 A 17th century Baroque masterpiece by Giovanni Francesco Barbieri, better known by his nickname Guercino, has been stolen from the Church of San Vincenzo in the historic center of Modena. The painting, Madonna with the Saints John the Evangelist and Gregory Thaumaturgus, was painted by the master in 1639 and has been in the church ever since. An allied bomb struck San Vincenzo on May 13th, 1944, destroying the presbytery and the choir and its late 17th century frescoes, but the Guercino survived. Let’s hope it can survive human greed.

The painting was not insured because “church cannot afford to insure every painting in its possession,” as San Vincenzo’s priest Father Gianni Gherardi put it, and as callous as that sounds, the truth is that practically every church in Italy is stuffed to the gills with masterpieces. It would be prohibitively expensive, even if private insurers could be secured, to cover everything. The alarm system installed with funding from the Modena Savings Bank Foundation a decade or so ago was turned off because “it was too expensive to keep up,” which I presume refers to the monthly bill.

San Vincenzo is not a parish church so it doesn’t stay open all week. The doors are opened every Sunday for mass and locked after the service is over. The thieves made their way inside, stole the painting and got out without leaving a trace. There is no sign of forced entry on the church door. The priest only realized something was wrong because the door was open.

Police believe at least three men were involved in the theft because the piece is so big and heavy, especially still inside the frame, that it one or two people wouldn’t be able to move it. They probably got in during mass on Sunday, August 10th, and hid until they could do their dirty deed under cover of night. They must have had transportation, most likely a van.

Not that insurance would be much consolation. The painting is invaluable and irreplaceable. It could be worth something like $8 million if we hypothetically considered a market value and if it were actually salable, but of course it’s not. It’s hugely famous and at nine and a half feet high and six feet wide, it’s impossibly conspicuous. Authorities are concerned that the thieves might cut it up into individual figures in the attempt to sell it, but they went through a lot of trouble to keep it whole. That’s why the current preferred theory is that it was a theft commissioned by a Bond-villainesque collector. That’s the go-to preferred theory, but time and time again we’ve seen thieves steal something first and only think of disposal once the object is burning a hole in their pockets. Then they bumble around for years trying to unload their ill-gotten gain in the most ridiculous ways, often to undercover cops.

The Carabinieri’s Tutela Patrimonio Culturale unit (a national police squad dedicated to investigating stolen art and antiquities) are in charge of the investigation. They’re looking through phone records and security camera footage from along the street. There are no cameras pointed at the church, but a van large enough to contain the painting should have been captured by other cameras.