The Victoria & Albert Museum has successfully raised £5 million to purchase the four bronze angels made to decorate the tomb of Cardinal Thomas Wolsey. In early December, the V&A campaign was still a million and a half short of the goal. I was hoping for a viral push thanks to the huge popularity of Wolf Hall on bookshelves, the stage and television, but in the end only £33,000 were raised from online donations. The total raised from the public appeal (online, phone, mail donations and sales of “Save the Wolsey Angels” buttons in the museum gift shop) was a rather meager £87,000. The Wedgwood campaign’s million pounds in public donations infected me with a dangerous and unwarranted optimism, I fear.

With such low figures from the general public, the V&A’s fundraising team must have worked overtime to coax donations out of donors.

The campaign was very much aided by a grant of £2 million from the National Heritage Memorial Fund, the Art Fund most generously contributed £500,000, and the Friends of the V&A gave £200,000; a further substantial gift was made in memory of Melvin R. Seiden, and many other private individuals and trusts, most notably the Ruddock Foundation for the Arts, also donated.

The National Heritage Memorial Fund and Art Fund donations were already counted in early December, so it seems like those individuals and trusts with the less conspicuous but still significant contributions pulled through in the home stretch. That’s a great thing, because the loss of these statues would have been a damn crime.

Cardinal Wolsey commissioned Florentine sculptor and architect Benedetto da Rovezzano, famous for his religious and funerary sculptures, to design and build his tomb in 1524. The meter-high bronze angels were created to hold candles atop four pillars on the corners of the black marble sarcophagus that would hold the cardinal’s remains. Wolsey’s political downfall in 1529 and death on the way to his treason trial in 1530 left his extensive properties in the hands of King Henry VIII. Henry decided to keep the parts of the tomb that had been finished for his own tomb and commissioned Rovezzano to make him an even fancier one than Wolsey had planned.

It was unfinished at the time of the king’s death in 1547. The remaining Tudor monarchs all made noises about completing their father’s tomb, but it never did happen. Then the Civil War came and the Parliamentarian penchant for converting the trappings of monarchy into cash saw the angels sold off. They disappeared for more than three centuries. We now know that some time during those 330 or so years, all four angels made their way to Harrowden Hall in Northamptonshire. When stately home was acquired by the Wellingborough Golf Club in 1975, the angels were on posts flanking the entrance gates.

Two of the angels were stolen from their perches in 1988, after which the survivors were brought indoors. The stolen ones wound up at a Sotheby’s auction in 1994. Their true history was lost — the catalog described them as bronze angels “in the Renaissance style” — and they sold for £12,000. They were finally returned to their illustriousness by Italian art historian Francesco Caglioti. He found them with a Paris antiques dealer and identified them from a detailed description of them in a 1530 inventory of Wolsey’s property. In 2008, he found their sisters at the Wellingborough Golf Club.

So even though the two Paris angels were stolen property, there was no way for the UK to claim them legally on account of the statute of limitations and conflicting laws in different countries. The Paris dealer offered his pair to the V&A for £2.5 million and the golf club offered its pair for the same price.

Now that justice has been purchased at so small cost, the Wolsey Angels will be taken off public display temporarily. They will be studied, analyzed and conserved and then will find their permanent new home on view with all apposite honors at the Victoria & Albert Museum. 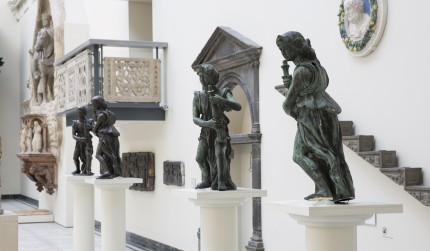