A drop-dead gorgeous villa in Tuscany that once belonged to the Renaissance genius Michelangelo Buonarrotti can be yours today for a mere $8,441,193. Nestled in the verdant Chianti hills just 22 miles from Florence and nine miles southwest of Siena, this masonry villa looks frozen in time, like Michelangelo might storm up any second and ask just what the hell you’re doing in his house. Except it has bathrooms now. Seven of them. Also eight bedrooms, fireplaces you could spit-roast an ox in and a kitchen that pulls off that rare miracle of integrating modern conveniences with ancient glories. Don’t even get me started on the ceilings.

Michelangelo bought the property in 1549 when he was 74 years old. He was hugely famous and in demand as a painter, sculptor and architect. Just one year after Michelangelo bought the villa, Giorgio Vasari would publish his biography of the master in his seminal work of art history, the Lives of the Most Excellent Painters, Sculptors, and Architects. It was the first biography of a living artist and testifies to the high esteem in which he was held by Vasari and most everyone else at this time. Michelangelo had had bouts of serious ill-health in the 1540s and suffered great personal losses when his close friend Vittoria Colonna and his brother Giovansimone Buonarrotti died within a year of each other, but he was still very much active, working on a variety of papal commissions and personal projects in Rome.

He’d been appointed architect of St. Peter’s Basilica in 1546 and worked on it steadily until his death. In 1542 he was commissioned by Pope Paul III to paint two frescoes, the Conversion of Saint Paul and the Crucifixion of Saint Peter, in the Pauline Chapel, a newly built chapel in the Apostolic Palace a door down from the Sistine Chapel where Michelangelo had just completed the Last Judgment in 1541. He finished the murals in 1549, the same year he bought the villa in Tuscany. You can see both frescoes, restored to their original brilliant colors in 2009, in this virtual tour of the chapel. They’re almost exactly to the right and left of your default position when you enter the room. From 1547 through 1550 he worked on completing the facade and courtyard of the Palazzo Farnese (Paul III was born Alessandro Farnese). He also started the Rondanini Pietà around 1547.

So Michelangelo was swamped with work which kept him in Rome and left him little free time to return home to his beloved Tuscany, chug Chianti and chill. (He didn’t drink, actually. Michelangelo lived something of an ascetic lifestyle.) As a committed Republican, he also had serious ideological differences with Cosimo I de’ Medici, first Granduke of Tuscany, which kept Michelangelo from returning to Florence no matter how thoroughly Cosimo showered him with inducements.

Michelangelo was in Rome when he died on February 18th, 1564, less than three weeks from his 89th birthday. His nephew Lionardo Buonarroti went to Rome to recover his uncle’s body and arrange its transport to Florence. Vasari’s second edition of the Lives claims, probably hyperbolically, that Roman authorities didn’t want to release the body because they wanted the great artist buried in St. Peter’s so Lionardo hid the corpse in a basket and smuggled it out of the city in the middle of the night. By whatever means, Michelangelo’s mortal remains were interred in the basilica of Santa Croce in Florence.

Lionardo inherited the Chianti villa after Michelangelo’s death along with everything else the artist had left behind, including the Casa Buonarroti in Florence which Michelangelo had bought but never lived in and which is now a museum with a rich family archive. The hillside villa remained in the Buonarrotti family for more than three centuries until it was sold in 1867.

The current owner has renovated it with due care for its historical significance and original elements. He also owns the original documents and deed to the home, which I presume comes with the house because you’d have to be a monster to separate the villa and the historic paperwork. That’s almost worth $8 million right there. 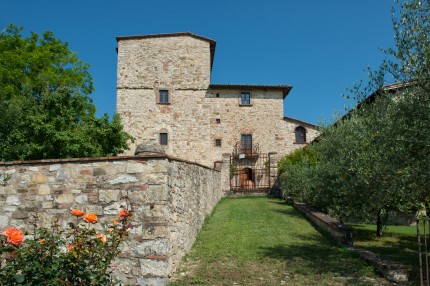