A piece of a terracotta relief depicting ancient Greek warriors has been discovered at Sozopol on the Black Sea coast of Bulgaria. The fragment dates to around 500 B.C. and features two hoplites at march. They both wear Corinthian style helmets and armored breastplates. The one of the left (the more intact figure of the two) carries a spear in his right hand and has a shield strapped to his back. He holds a horn to his mouth with his left hand. It is a section of a larger frieze that once adorned a temple to Apollo. 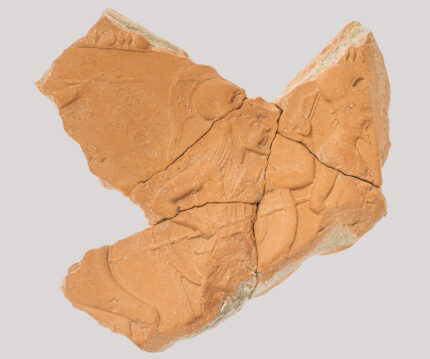 Sozopol was founded by colonists from the Greek city of Miletus in the 7th century B.C., making it one of the oldest cities of the western coast of the Black Sea. Dubbed Apollonia Pontica, it was dedicated to Miletus’ patron deity, Apollo, and was famous in antiquity for the 45 foot-high bronze colossus of Apollo sculpted by the 5th century B.C. Greek sculpture Calamis. It stood outside the Early Classical temple of Apollo Iatros (the healer) for 400 years until the Romans looted it in 72 B.C. and installed it on the Capitoline Hill. It was lost in the 4th century, likely melted down along with so many other pagan bronzes. 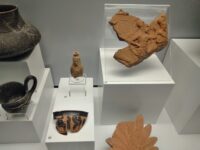 The temple of Apollo was located on what is now St. Cyricus Island. The first archaeological excavation of the site was done by French diplomat L. Degrand in 1904. Further investigation was interrupted by wars, and the island was a restricted military zone until 2005. Excavations began again in 2009 and have since unearthed materials from a Late Archaic temple as well as from the famous Early Classical temple complex.

Other fragments of the terracotta frieze were discovered in 2018 and 2019. A total of 20 fragments have been unearthed in the recent digs, all of them from the same scene. Degrand’s excavation also recovered a section of the frieze which is now in the collection of the Louvre along with the rest of the artifacts Degrand unearthed. The Louvre’s section is appears to be an exact match of the newly-unearthed one, albeit much less worn. 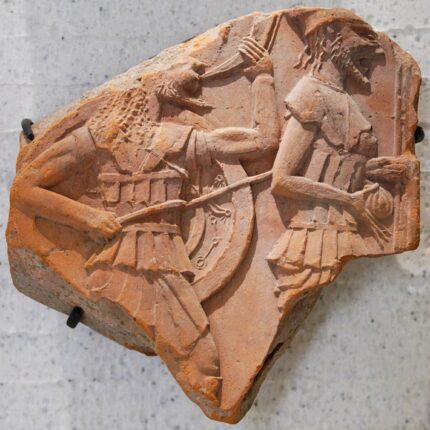 2 thoughts on “Fragment of Greek warrior relief found in Bulgaria”