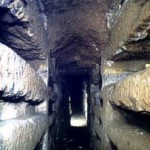 Scientists have found 2 new species of the Kribbella bacterium on the walls of the catacomb of St. Callistus. This is significant not only because, hey, new life forms here, but also because studying the wall-chewing bacteria might help with conservation efforts.

By studying bacteria that ruin monuments, the researchers hope to develop methods of protecting cultural heritage sites such as the catacombs in Rome. The two new bacterial species discovered in the tombs also have the potential to produce molecules that have useful properties, like enzymes and antibiotics.

“The special conditions in the catacombs have allowed unique species to evolve,” said Professor Dr Urzì. “In fact, the two different Kribbella species we discovered were taken from two sites very close to each other; this shows that even small changes in the micro-environment can lead bacteria to evolve separately.”

It’s big news, of course, and potentially great news, but it’s set against the bad news that the catacomb walls are decaying.