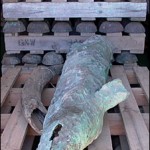 The booty-packed shipwreck De Beers operators found off the coast of Namibia cannot have been explorer Bartolomeu Dias’ caravel.

The Dias thing was always a bit of a long shot. Meanwhile, the find remains an extraordinarily rich one.

A trident indented on the ingots shows them to have been supplied by German merchant house Jakob Fugger — a known supplier of ingots to the Portuguese crown in the era of the Habsburg dynasty.

So the ship is most likely Portuguese — the initial reports had that right — and the cargo includes goods from Asia, Europe and Africa. It’s like a proto-global economy all on one ship.

The team working on the shipwreck is a global one too, including archaeologists from South Africa, Namibia, Zimbabwe, the United States, the UK and Portugal. Some of the rare and delicate navigational instruments have been sent to Portugal for further study. The wooden elements are going to the US for preservation. The gold and silver coins have been deposited in a Namibian bank.

Eventually, all the pieces will return to Namibia to join the gold, silver, tin, copper, pewter, elephant tusks, ceramics and cannon.

They should make a maritime museum in the area. That coast is known as “the skeleton coast” because of the many skeletal shipwrecks dotting the seabed. That could the center of a whole new Namibian archaeological movement.

2 thoughts on “Update: Namibian shipwreck not Dias’, but still awesome”