“Naked Woman” was stolen 33 years ago after the Milanese family who owned it brought it to a lab for minor restoration. The always-stellar Carabinieri art squad found it in a gallery in Riccione (northern Italy, close to the Austrian border) on a tip from an appraiser who had been asked to value it. 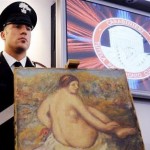 The appraiser being a, you know, expert in his field, spotted it as a stolen piece and reported it to the police, along with another painting the gallery owner had asked him to appraise, a purported Manet which turns out to be a forgery.

The gallery owner, who is either a keystone kriminal or blind, deaf and dumb, was arrested along with two other people who had had previous run-ins with the law.

The original owner has since died, but “Naked Woman” will most likely be returned to the family, as well as it should be since its provenance was confirmed by the daughter who recognized a spot where she had hit the painting with a ball when she was a little girl.

I don’t even want to know what her dad said when that happened. “No, honey. We don’t play bouncy-ball against the Impressionist master.”