Here is a thing that is a big deal: the Terracotta Army, clay statues made in the 3rd century B.C. for the tomb of Qin Shi Huang, the first Emperor of China. Here is another thing that is a big deal: the Kouros statues, free-standing sculptures in the round that first appear in the archaic period of Greece in the 7th century B.C. Here is something that should be a big deal but that I have literally never heard of until today: a group of approximately 33 life-size warriors carved free-standing in the round from solid stone by the Nuragic civilization of Sardinia sometime between 1000 and 800 B.C.

This is the only group of life-sized warriors ever found in Europe, and in a freakish coincidence, the first pieces of them were discovered in March 1974, the same month and year as the first Terracotta Army figures were discovered. They were found in an ancient necropolis near Cabras, western Sardegna, broken into thousands of pieces. A handful of ceramic fragments in the group were radiocarbon-dated to around the 9th century B.C.

Archaeological excavations in the area over the next few years recovered even more fragments. The eventual total was 5172 pieces of stone warriors, among them 15 heads and 21 torsos. Ten fragments from two statues were put back together and displayed, but the rest of the pieces languished uncleaned and unexamined for the next 30 years or so, until 2004 when archaeologists and conservators began a program of restoration at the Sassari Center for Conservation and Restoration. Researchers carefully cleaned the pieces and re-assembled the warriors using supports rather than trying to glue the bits together with modern plaster and stone to make them look like they did when new.

Twenty-five of the warriors are now intact once again and will go on display starting this summer at the Cagliari Museum in southern Sardinia. There are three different types of fighters represented: 16 “boxers,” bearing shields over their heads, six archers and six other warriors, accessorized with bows, shields, swords, chest armour and horned helmets.

Also re-assembled from the fragments are 13 models of nuraghe, massive conical stone castles built by the Nuragic culture starting in 1500 B.C. These are the oldest castles in Europe. Tens of thousands of them used to dot the island, but time, stone reuse and many invasions by successive waves of Carthaginians, Romans, Vandals, Byzantines, Moors, Spaniards and finally Italians have reduced their numbers to a mere 7000 today. That’s pretty damn sturdy construction considering that no mortar was involved.

It was the Carthaginians who probably destroyed the stone army during their conquest of the island in the 6th century B.C. The piles of fragments indicate intentional destruction, and since the stone warriors and model castles guarded the tombs of two generations of a single extended family, their destruction would have been a powerful symbol that there was a new boss in town.

I’m waiting to hear the ancient aliens theory, because I’ll be damned if those warriors’ faces don’t look exactly like C-3PO. 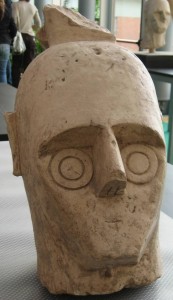 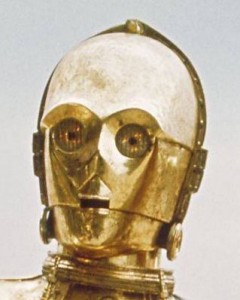