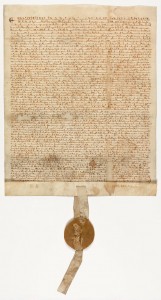 Magna Carta, the English charter in which King John guaranteed certain civil liberties to England’s powerful feudal barons, was reissued by every new king at least once between the first version in 1215 and the final edition in 1297 which remains on the books to this day. Every time the charter was amended, multiple copies (known as “exemplifications”) of the contract would be issued to all signatory parties and pertinent archives.

Seventeen exemplifications from various releases have survived to this day, almost all of them in England. There is only one in the United States and that one is also the only Magna Carta in private hands. It’s a 1297 copy bearing the royal seal of Edward I and was kept for hundreds of years by the Earls of Cardigan. They sold it to Ross Perot in 1984, and the Perot Foundation loaned it to the National Archives where it was on display for many years.

In December of 2007, the Perot Foundation sold the document to raise money for its charitable missions. It was purchased for $21.3 million by David M. Rubenstein, the same history buff billionaire who recently donated $7.5 million to repair the earthquake-damaged Washington Monument. He loaned it right back to the National Archives, and then gave them $13.5 million to build a new custom case and to renovate the gallery in which Magna Carta will be on permanent display.

Last year, the National Archives began a program of conservation on the precious parchment. They removed it from its encasement and examined it carefully to see what needed fixing. Required fixes included removing old patches and glues that were causing the paper to contract, filling in holes and thin spots with archival long-fiber conservation paper and wheat starch paste, humidifying the parchment to keep it from getting brittle, and flattening the document. Ultraviolet photographs taken while the charter was out of its protective encasement found areas of writing that had been erased by water damage.

Looking forward to the long-term challenges of conserving such an ancient document, the National Archives asked the engineers at the National Institute of Standards and Technology (NIST) to create a new encasement that would keep chemically inert argon gas trapped inside the casing instead of air, control for temperature and humidity, and also allow for ease of transport and display.

NIST worked from a three-dimensional laser scan of the document to support it on the platform and to create a nest to hold the original wax seal with Edward I’s likeness, which is attached to the Magna Carta by a frail parchment ribbon.

The platform was created from a single 6-inch thick block of aluminum to minimize the number of joints or spots that could cause leaks in the encasement, explained Brandenburg. About 90 percent of the block was cut away with a computer-controlled milling machine based on the three-dimensional image to create the perfect fit.

The end result is an enclosure about 41 inches wide by 28 inches long and 6 inches deep. It weighs 225 pounds. The encasement cover is made of a special laminated glass with antireflective coatings to ensure maximum visibility of the document while protecting it. The encasement is sealed with close-fitting bolts that hold the frame against double O-rings that create the encasement seal. The case was filled with argon gas and will be monitored to avoid as much oxidation damage as possible.

Here’s a glimpse of the NIST team building this cutting edge device:

Much of that neat technology will be invisible to the National Archives visitor. The encasement is itself encased in a new interactive display in the West Rotunda Gallery of the National Archives Building in Washington, D.C. Visitors can zoom in on a high resolution image of the document, seeing in detail the areas that were repaired. They can see the ultraviolet pictures of the writing that can no longer be seen with the naked eye. They can compare a translation of Magna Carta with language in the foundational documents of U.S. government — the Constitution and Declaration of Independence — that were influenced by this medieval charter written almost 800 years ago.