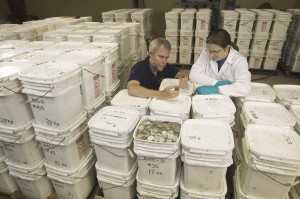 In May of 2007, Odyssey Marine Exploration, a privately owned marine treasure-hunting company, discovered a Spanish shipwreck somewhere on the Atlantic seabed. Odyssey refused to divulge the exact location or the name of the ship. They ultimately recovered 17 tons of silver coins, plus almost 100,000 gold coins and a number of other artifacts from the wreck, which they code-named “Black Swan.” The site must have been near Spain because Odyssey secretly landed the $500 million treasure on Gibraltar, chartered a flight and flew the loot back to its headquarters in Tampa, Florida.

Spain was displeased, to put it mildly. Odyssey claimed the find was made in international waters in full compliance with the United Nations’ Law of the Seas, but since they refused to reveal the wreck site and pleaded ignorance about the name of the ship, Spanish authorities got suspicious. They filed suit against Odyssey Marine in a federal courthouse in Tampa, demanding that the company reveal everything it knows about the wreck so Spain could claim ownership, and they got a Spanish court order to seize Odyssey ships around Gibraltar and search them for historical artifacts.

The case has been winding its way through the legal system ever since then. In 2009, a Florida judge declared that the “Black Swan” was the Nuestra Señora de las Mercedes, a Spanish frigate sunk by the British off the coast of Cape St. Mary, Portugal in 1804, that Odyssey had specifically set out to find the Mercedes and had succeeded, and that Spain was the rightful owner of the recovered treasure. Odyssey’s claims of ignorance did not impress.

The judge argued that the coins, all dated prior to 1804, matched the Mercedes’ haul of mainly silver coins minted in Lima – part of a haul being brought back to finance Spain’s European wars. He also said cannon found there matched those on board the Mercedes.

“That Odyssey, which set out to discover the Mercedes, found this mix strewn about in an area a few football fields square where the vessel met its explosive ending makes the conclusion even more compelling.”

Judge Pizzo also ruled that Peru, which had filed a suit of its own in 2008 claiming the treasure because the coins were made from Peruvian gold and silver, did not have a valid claim because there was no nation of Peru in 1804.

Odyssey appealed the ruling. Now a federal circuit court judge has upheld Judge Pizzo’s decision, giving Odyssey Marine 10 days to return the loot to Spain. Odyssey will doubtless appeal to a higher court next, so this story isn’t over yet, but they’ll run out of courts soon enough. 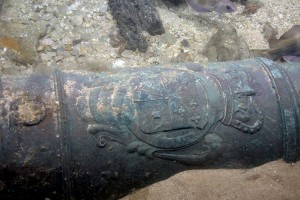 Don’t worry about Odyssey, though. They just made a sweet deal with the British government and the Maritime Heritage Foundation to recover the wreck of the HMS Victory which an Odyssey team discovered in 2008. This is the predecessor of Admiral Nelson’s famed vessel; it went down in a storm in 1744 carrying four tons of gold.

The terms of the agreement ensure that all of Odyssey’s costs will be reimbursed and they will in addition receive a percentage of the market value of any recovered artifacts. If the Maritime Heritage Foundation chooses, they will get paid in artifacts rather than cash, but Odyssey prefers cash.