In 2011, archaeologists from the Museum of Cultural History in Oslo unearthed a unique sword from the late Viking era in a grave in the town of Langeid, southern Norway. The grave was unusually large, the largest of the 20 graves found in the burial ground, with postholes in the corners indicating that it had once had a roof. So prominent a tomb must have belonged to a person of high status who would likely have been interred with valuable objects for the afterlife, but when the coffin was excavated archaeologists found no grave goods except for the remains of two silver coins. When the team dug outside of the coffin, they found two metal objects on either side. One was a sword, the other a large battle-axe.

The sword is just over a three feet (94 centimeters) long, and while the iron blade of the sword is heavily corroded, the hilt is in excellent condition and of exquisite quality. The guard and pommel are silver engraved with swirls, crosses and what appear to be letters, all filled in with gold and edged with copper alloy thread. The grip is tightly wrapped with silver thread in a herringbone pattern. Conservators found fragments of wood and leather on the blade, likely all that remains of the sheath. 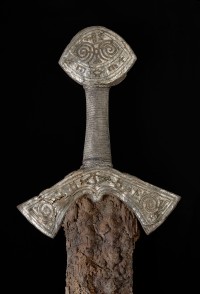 The letters are from the Latin alphabet, but they’re not in a legible arrangement and some are backwards or look like two or more letters were combined.

“At the top of the pommel, we can also clearly see a picture of a hand holding a cross. That’s unique and we don’t know of any similar findings on other swords from the Viking Age. Both the hand and the letters indicate that the sword was deliberately decorated with Christian symbolism. But how did such a sword end up in a pagan burial ground in Norway? The design of the sword, the symbols and the precious metal used all make it perfectly clear that this was a magnificent treasure, probably produced abroad and brought back to Norway by a very prominent man,” added Camilla Cecilie Weenn.

Radiocarbon dating of charcoal found in one of the postholes dates the burial to 1030 A.D., a date confirmed by one of the two coins found inside the coffin. It’s an English silver penny minted during the reign of King Ethelred II, aka Aethelred the Unready (r. 978-1016), and is the only Anglo-Saxon coin ever found in Langeid.

The battle-axe found next to the coffin also has an association to early 11th century England. The shaft was coated with brass, a very rare find in Norway, but very similar to numerous axes that have been discovered in the Thames in London. The Thames axes date to the same time as the Langeid axe, a period when more than one Scandinavian king — Danish King Sweyn Forkbeard, his son Cnut the Great, King Olaf II of Norway — fought to conquer England. London was raided repeatedly. The axes may have been left in the Thames by Norse raiders, lost or sacrificed after a victory.

It’s entirely possible that the man buried with the weapons may have fought under one of those kings. There’s a rune stone in the Setesdal valley just south of Langeid inscribed in Old Norse “Arnstein raised this stone in memory of Bjor his son. He found death when Canute ‘went after’ England. God is one.” Norway was under Danish sovereignty when Cnut invaded England in 1015. There were Norwegian fighters from noble families in his army who would have been required to arm themselves with the best weapons.

The runic stone dates from the same period as the final phase of the burial ground and testifies that Christianity is about to take root in Norwegian society. It is the oldest runic stone in Norway that refers to Christianity. Could this also explain why the weapons were placed outside the coffin? In a transitional period, people may have chosen to use both pagan and Christian elements in a funeral. The Langeid grave is from one of the last pagan funerals we know of from Norway and marks both the greatness and the end of the Viking Age.

The sword find is being announced now, four years after it was made, because it’s going on display for the first time. It is part of the Museum of Cultural History’s Take It Personally exhibition which examines the history of adornment, with this sword being an example of how the precious metals and decorative details of women’s jewelry were used on weapons and armour to telegraph the bearer’s wealth and power. The exhibition opened on June 12th and will run until June 1st, 2016.