The restoration of Michelangelo’s Bandini Pietà at the Museo dell’Opera del Duomo has been completed, revealing the original marble and answering questions that have long been asked about this iconic masterpiece. The restoration began November 23, 2019, and was supposed to be completed by summer of 2020, but a certain virus had other ideas. Conservators were able to get back to work in September of last year, and now the rejuvenated Pietà is back. 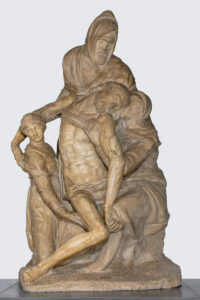 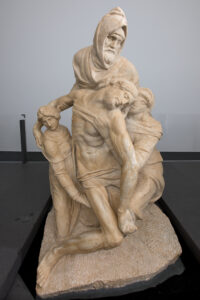 Michelangelo sculpted three pietàs over his lifetime. The first, now in St. Peter’s Basilica in Rome, features a preternaturally young Mary seated with Jesus’ body draped across her lap. The second, the Rondanini Pietà now at the Castello Sforzesco in Milan, features a more mature Mary standing up, holding the body of her son. Only the Bandini Pietà has figures other than Mary and Christ, and indeed, the dominant figure in the composition is Nicodemus who looms large behind Mary the Mother, Mary Magdalene and the limp, twisted form of Jesus.

This was Michelangelo’s most audacious sculpture. He was inspired by the Laocoon Group, a large sculpture depicting the death of the Trojan priest and his sons that had been praised by Pliny in antiquity. The Laocoon was rediscovered in 1506 under a vineyard next to the Basilica of Santa Maria Maggiore. Michelangelo, dispatched by Pope Julius II, was present to witness its excavation and its exceptional artistry had a strong influence on him. He too wanted to create a group of figures out of a single massive block of marble, only his masterpiece would beat the Laocoon in size and number of figures. It was meant to adorn a chapel in the Basilica of Santa Maria Maggiore in Rome where Michelangelo planned to be buried. That the face of Nicodemus is a self-portrait of Michelangelo was a sculptural representation of his devotion to Christ.

He worked on this group for almost a decade, starting in 1547 when he was in his mid-70s and concluding in 1555. The story told by Michelangelo’s friends and fellow artists Giorgio Vasari and Ascanio Condivi was that Michelangelo, enraged by the intractable flaws he kept encountering throughout the three-ton block of marble, took a hammer to the work until his servant Antonio da Casteldurante begged him to stop. Michelangelo agreed to let Antonio keep the sculpture and its broken pieces and to let Florentine sculptor Tiberio Calcagni, a friend and collaborator of his, repair it. Calcagni bought it from Casteldurante on behalf of banker Francesco Bandini.

Bandini kept it the garden of his villa in Rome and it remained in the family after his death. It passed through a couple of hands before being sold to Cosimo III de Medici, Grand Duke of Tuscany, in 1671. It took three years for him to figure out how to transport the huge piece to Florence. The Pietà has been in Florence ever since in several different locations.

Aside from occasional cleanings, no restoration work has been recorded after Calcagni reattached body parts and controversially altered Mary Magdalene’s face. There is one documented intervention. In 1882, a plaster cast was made of the sculpture. The residue from the plaster left the marble surface dry with large areas of bright white marring the surface. Restorers tried to fix that by applying layers of wax on top of the residue, and over time the wax darkened and mixed with dust to change the surface colors to a deep, uneven amber.

To address these issues in the least invasive manner possible, a multi-disciplinary team of conservators studied and documented the condition of the Pietà. They then cleaned and restored it in a custom-built “open laboratory” so visitors could see them at work behind a plexiglass wall. In the process, the team discovered that much of the origin story relayed for 500 years is likely apocryphal.

Diagnostic inspection led to the discovery that the marble came from quarries in Seravezza, in the province of Lucca, rather than from Carrara as had been believed. This discovery is significant because the quarries in Seravezza were owned by the Medici, and Giovanni de’ Medici, soon to be Pope Leo X, had enjoined Michelangelo to use marble from the quarry for the façade of the church of San Lorenzo in Florence. How this huge block of marble got to Rome where Michelangelo carved this Pietà from it between 1547 and 1555 is still a mystery.

Michelangelo was unhappy with the quality of the marble from these quarries because it revealed sudden veining and minute cracks difficult to detect from the surface. Thanks to the restoration, it has proven possible to confirm that the block used for the Pietà was indeed flawed, as Vasari tells us.  In his Lives of the Artists, Vasari describes it as hard and full of impurities and that sparks flew from it with every blow of the chisel. Numerous small inclusions of pyrite were discovered, and they most certainly would have caused sparks when hit with a chisel. More importantly, the presence of numerous minute cracks, particularly on the back and front of the base, suggests that Michelangelo may well have encountered them when carving Christ and the Virgin’s left arms and was forced to stop working on it. This is a more likely hypothesis than that of a now ageing Michelangelo, unhappy with the result, trying to destroy the sculpture in a moment of distress and frustration by taking a hammer to it, because the restorers found no sign of any hammer blows, unless, of course, they were erased later by someone else.

Based on these discoveries, it was decided to proceed by first conducting cleaning trials in order to identify the most suitable methodology. Once established, the restoration process proper began where the deposits were thickest, using a non-invasive, gradual, and controlled method of cotton pads soaked in deionised and lightly heated water. For the wax build-up applied to the group’s surface, small, closely spaced splashes and drippings caused by candles on Florence Cathedral’s high altar, behind which the group had stood for 220 years, cleaning with water was supplemented with the use of a scalpel in the toughest areas.

The open laboratory will remain in place for six months so that visitors to the Museo dell’Opera del Duomo, accompanied by guides, can see the Pietà up close. The tours of the laboratory run through March 30th, 2022.