The face of Pharaoh Ramesses II at the end of his life and at the height of his reign has been digitally reconstructed. Researchers created two realistic portraits of Ramesses II using a CT scan of his mummy as the departure point. The latest computed tomography data was used to create a 3D virtual model of Ramesses’ skull and forensic software used to reconstruct the pharaoh’s face as he looked when he died at age 90. Age regression techniques created a second portrait as he would have looked when he was around 45 years old. 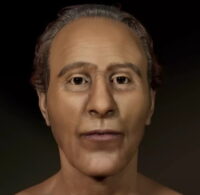 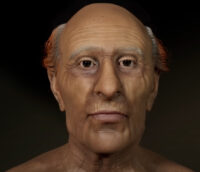 Ramesses II was born around 1303 B.C. and was just 24 years old when his father Seti I died making him pharaoh. He reigned for 66 years, a warrior king who enlarged Egypt’s empire and built or expanded some of its most important monuments, including the Temple of Karnak. His mummy was discovered in 1881 and is now in the National Museum of Egyptian Civilization in Cairo. 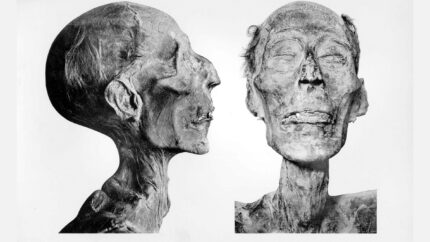 Cairo University radiology professor and mummy expert Sahar Saleem, who in 2019 used CT scans and digital imaging software to virtually unwrap the mummy of Pharaoh Amenhotep I, worked with Liverpool John Moores University’s Face Lab, a multidisciplinary research group that uses forensic techniques to recreate the faces of historical figures as accurately as possible from skulls, death masks or portraits. Their subjects range from top-of-the-bill notables like King Richard III and Robert the Bruce to complete unknowns like the Goucher Mummy and a medieval Norwegian woman.

For the latest facial reconstruction, Saleem made a three-dimensional virtual model of the pharaoh’s head and skull from new CT scan data — effectively, thousands of X-rays assembled into a 3D image — which Wilkinson then used to reconstruct his face with computer software used in criminal investigations.

Next, Wilkinson used computer-generated imagery (CGI) techniques to add skin, eye and hair textures, based on what Saleem reported would have been common among Egyptians at the time — which showed what the pharaoh may have looked like when he died — and finally used the age regression software to show how he had likely appeared decades earlier. “The age regression was challenging, as this was in 3D,” she said.

Wilkinson explained that the field of estimating the face of someone from their skull is dominated by two approaches: “facial approximation,” which uses average data, templates and biological profiles to produce an “average” face, which might result from several different skulls; and “facial reconstruction,” a more detailed attempt to determine what a particular person looked like, based on anatomical standards, measurements and morphological analysis. A related term is “facial depiction,” which adds colors and textures, she said.

In this case, the team used the more detailed approach. “The face of Rameses II was produced using 3D facial reconstruction and then a 3D facial depiction process,” Wilkinson said.

(Credit and apologies for the title go to Percy Bysshe Shelley, who was inspired by a fallen colossus of Ramesses II to write the verse I butchered in his poem Ozymandias.)