Check out this neat article about the flurry of recent books about the decline and fall of Rome.

It’s by Bryan Ward-Perkins, author of a great decline book of his own, that was the source of the greatest list of all time. His experience gives him an interesting insider’s perspective on what publishers are up to (ie, trying to sell books, of course). 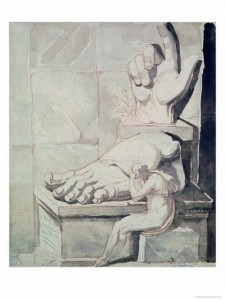 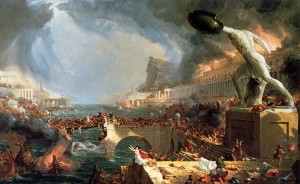 In the great battle of meditative vs. lurid, lurid wins hands down. (Not that I’m hating, mind you. I dig them both.)

Anyway, the books Perkins profiles offer a variety of theories for the fall, but he thinks they all cluster around a central anxiety.

But it is hard not to conclude that a widespread anxiety over a modern “decline of the West” underlies the presence of all these books on the disintegration of the Roman empire, and of a reading public prepared to buy them. It is certainly very striking that so many books have recently appeared on the dissolution of Rome’s power, and so very few chart its rise and apogee. Europeans, and their descendents the North Americans, have had it very good for four or five centuries, thanks to their dominance (military, political, economic, cultural, even religious) over the globe. Romans had it very good for about the same number of centuries. Then things got a lot more “complicated” for the Romans. Are we in the modern West headed in the same direction?

Most of the six books make explicit and/or implicit analogies between the Roman then and our modern now. James O’Donnell’s The Ruin of the Roman Empire takes a particularly intriguing stance.

His takes is that Eastern Emperor Justinian ruined things for everyone when he invaded Italy and defeated the Ostrogoths who had established a fairly serviceable kingdom after killing the last emperor and sacking the place. From O’Donnell’s perspective, the barbarian Ostrogoths were trying preserve Roman civilization, and Justinian was an impulsive militarist who didn’t think through the long-term consequences of his bellicosity.

14 thoughts on “The rise of the decline industry”