Charlottenburg Palace, home of King Frederick the Great’s first court after he ascended the throne in 1740, reopened on December 26th after two years of renovations. It started out as a small private retreat in Lietzow, a village a mile or so west of Berlin, commissioned in 1695 by Electress Sophie Charlotte, sister of British King George I and wife of Elector Frederick III of Brandenburg. In 1701, Frederick would declare himself “King Frederick I in Prussia” (the “in” was to assure the Holy Roman Emperor that his aspirations to kingship would not bleed across the boundaries of the empire into his role as Prince-elector of Brandenburg).

Once her husband’s promotion made her a queen, Sophie Charlotte hired Swedish builder Johann Friedrich Eosander to expand her little country retreat into a Baroque palace modeled after Louis XIV’s Versailles. There she collected poets, painters, scholars, theologians and musicians around her, creating a vibrant cultural community at her Lietzow court. She died unexpectedly of pneumonia in 1705. She was just 36 years old. In her honor, Frederick renamed the palace and the town that grew up around it Charlottenburg.

Charlottenburg Palace was the original home of the fabled Amber Room. It was designed by Andreas Schlüter, the German baroque sculptor and architect who helped complete the palace after Johann Arnold Nering died in 1695, and built by Danish amber master craftsman Gottfried Wolfram. Frederick I commissioned it in 1701 in the afterglow of his coronation in Königsberg, a Baltic port city that had been famous for its amber artistry since the Middle Ages. Königsberg amber of every shade was pieced together into mosaic panels that were installed on the walls of a small game parlour in Charlottenburg Palace. Construction took a decade, from 1701 to 1711.

Tsar Peter the Great remarked on the room’s beauty during a visit to the palace. Recalling the tsar’s appreciation, in 1716 King Frederick William I of Prussia gave the room to Peter as a diplomatic gift marking Brandenburg-Prussia’s 1715 alliance with Russia against Sweden in the Great Northern War. He received “55 very tall Russian soldiers” in return. Frederick William shared little of his parents’ interest in the arts; expanding Prussia’s military was his thing, which is why he was more than willing to strip the amber off the walls to seal a military alliance and secure an elite cadre of leggy troops.

Charlottenburg, palace and town, were neglected under Frederick William’s reign. He stopped all building projects and even tried to revoke the town’s charter, although he did use the palace to receive state visitors and host grand family affairs. It wasn’t until his son Frederick II of Prussia, later dubbed Frederick the Great, came to the throne in 1740 that Charlottenburg was returned to its former prominence. Construction resumed and Frederick commissioned the Superintendent of all the Royal Palaces, Georg Wenzeslaus von Knobelsdorff, to build a new east wing following Eosander’s design from four decades before.

The New Wing was lavishly appointed in rococo style. Rooms included the First and Second apartments of the King, the White Hall, the Banqueting Hall, the Golden Gallery and the Throne Room. Frederick housed his extensive collection of French paintings in the palace and later kings added a collection of marble and plaster sculptures that are excellent illustrations of the development of Berlin sculpture heavily influenced by classical Greece and Rome.

The palace was severely damaged by Allied bombing raids in 1943 and 1945. After the war it was rebuilt, unlike many other war-damaged palaces, making it the largest surviving Hohenzollern residence in Berlin. There were additional renovations in the 1950s and 60s, but the systems installed then are now outdated, inefficient and not in compliance with energy consumption, accessibility and fire safety regulations. In 2008, a major program of refurbishment began to address all the issues of Charlottenburg Palace in a comprehensive manner. The program has been divided into 10 parts so that visitors can continue to enjoy much of the palace even as work makes some areas inaccessible.

It’s the restoration of the New Wing that has just ended and while some of the biggest upgrades are unseen — new insulation between roof and ceiling, new climate control systems for the White Hall and Golden Gallery, a basement full of new fire monitoring technology — the entire envelope of the building has been carefully restored, from plaster and masonry elements of the façade to the windows, doors, wrought iron railings, external paint and roof tiles. With restoration complete, the sculpture and French painting collections are again on display in the newly reopened wing.

The two phases of the New Wing restoration cost €4.5 million while the entire project is expected to cost €14.3 million and will be completed in 2017. 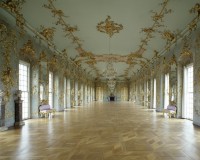