Osteological remains believed to date to the French Revolution have been found in the wall of the Chapelle Expiatoire, a memorial chapel dedicated to King Louis XVI and Queen Marie Antoinette built on the site of a cemetery where they were buried after they were guillotined.

Aymeric Peniguet de Stoutz, the chapel’s administrator, turned historical detective after he noticed curious anomalies in the walls between the columns of the lower chapel. Anxious not to damage the building’s foundations, the French authorities called in an archaeologist, who inserted a camera through the stones in the walls.

In his report, archaeologist Philippe Charlier confirmed Peniguet de Stoutz’s hypothesis: “The lower chapel contains four ossuaries made of wooden boxes, probably stretched out with leather, filled with human bones,” he wrote. “There is earth mixed with fragments of bones.”

The Madeleine Cemetery had been in use for less than 75 years when it was shuttered by the Revolutionary government in 1794 after residents complained about the stench. It opened in 1721 and received an average of about 160 new burials a year. Those figures were eclipsed by tragedy in 1770 after 132/3 people died when a fireworks display on Place Louis XV (modern-day Place de la Concorde) celebrating the marriage of the Dauphin to Marie Antoinette went awry and a stampede ensued.

Come the Revolution, the plodding pace of burials picked up briskly. Part of the Revolutionary agenda was the creation of large extramural cemeteries to replace the hundreds of insalubrious, shoddily-maintained churchyards grossing up the city, but the death toll of Revolution necessitated a more immediate solution. La Madeleine fit the bill nicely. It was a ten minute stroll from the former Place Louis XV, now renamed Place de la Révolution, where the guillotine was erected. As a relatively new cemetery, it still had space for inhumations. It was also walled in, keeping the ugly work of the constant grave-digging and body dumping away from prying eyes.

Some of the victims of the Revolution believed to have been buried there are the Madame du Barry, more than 600 Swiss guards killed defending the royal family in the Tuileries Palace during the Insurrection of 10 August 1792, more than a thousand prisoners killed in the September Massacres including Marie Antoinette’s closest friend the Princess de Lamballe, the Duke of Orléans aka Phillipe Égalité, dozens of Girondists, Charlotte Corday and last but not least, Jacques Hébert and his followers who were buried there on March 24th, 1794, right before the cemetery’s closure.

Walls notwithstanding, people were definitely watching the Revolution’s body count get buried and watching very closely at that. In 1802, Olivier Desclozeaux, a royalist who had lived next door to the cemetery since 1789, bought the land. He claimed to have seen where the guillotined bodies of King Louis and Queen Marie Antoinette had been buried and paid his respects by planting trees and hedges around the burial site. He sold the land to Louis XVIII in 1815 and the king had the remains of his older brother Louis XVI and his queen moved to the Basilica of Saint-Denis, the ancient necropolis of the kings of France. The next year Louis XVIII commissioned construction of the Chapelle Expiatoire where his brother’s remains had once lain. It was completed in 1826. 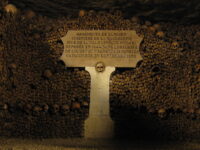 The Madeleine cemetery was only fully cleared in 1844. All extant bones were removed to the West Ossuary. When it was closed in 1859, the bones moved to their final resting place: the Catacombs of Paris. Today a plaque notes the stack of bones said to have come from Madeleine.

There is no way of knowing whether the bones in the chapel wall were the remains of guillotined aristocrats, Swiss guards, revolutionaries killed by other revolutionaries, victims of the fireworks debacle or any of the regular 160 yearly burials that took place at the Madeleine Cemetery from 1721. Louis XVIII ordered that “no earth saturated with victims [of the revolution] be moved from the place for the building of the [Chapelle Expiatoire],” but it seems somebody involved in the construction didn’t follow directions, probably because the exigencies of building over a cemetery required a little flexibility lest the remains be destroyed in construction.