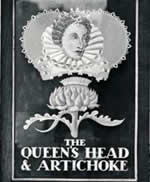 Britain’s pubs are in decline. Many of them are owned by large corporations offering franchise fare and mass-market details. The smallholders are collapsing at a precipitous rate. Fifty-seven pubs close every month.

Their hand painted signs disintegrate with them.

Only the 30 independent pub chains and breweries in Britain are still ordering individually painted signs. The St Austell Brewery in Cornwall has a full-time sign painter and the Donnington Brewery at Stow-on-the-Wold in Gloucestershire is hanging painted signs at its 16 tied pubs. Whitbread ran a sign-painting studio in Cheltenham until 1991, but has given up brewing and now runs pub restaurant chains such as Brewers Fayre.

God knows what stamped polymer crap is swinging outside places where once hand-painted lambs and archbishops cavorted on wood and iron. Googling “antique pub signs” turns up a horror show of groomsman gifts and “what to get the frat house that has everything” tat.

The pub or inn sign tradition goes back to Roman times, when a vine around a pole signaled there were victuals to be had inside. Richard II made pub signs compulsory so the official Ale Taster could easily spot his charges, so there must have been an explosion of awesome after 1393.

6 thoughts on “The dying art of pub signs”