A previously unknown piece of music written by Mozart in his hand has turned up in a small library in Nantes. It’s unsigned, but the handwriting has been authenticated by the International Mozarteum Foundation in Salzburg.

Some of the first part of the fragment is in D minor, while the second is in D major and marked “Credo” — a major clue that the work is a sketch for a Mass, which typically includes such a movement, said Robert D. Levin, a professor at Harvard University who is well-known for completing unfinished works by Mozart. […] 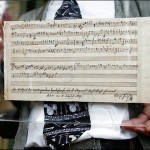 For anyone who wants to try sight-reading the fragment, a bit of detective work is required. Musicians must work out the key signature and clef based on other clues in the music. The tempo is also mysterious. And there is no orchestration.

“It’s a melody sketch, so what’s missing is the harmony and the instrumentation, but you can make sense out of it,” Leisinger said. “The tune is complete.”

This find is also significant because it indicates Mozart had a personal interest in writing church music towards the end of his life. This wasn’t a commissioned work like the Requiem.

The first performance is already expected for January.