The unique shape of the rock structure helped the Normans trap fish without boats or anything at all. All they had to do was wait for the tide to go out and hundreds of fish would be trapped behind the rocks.

The trap is just 12ft deep close to Poppit Sands on the Teifi Estuary in Dyfed. Dr Otto believes the walls are made of locally quarried rock or boulders brought down to the coast by glaciers during the last ice age.

The trap’s walls are covered in algae, worms and sea anemones. The wall is around three feet wide, and only the top foot is exposed. The researchers are unsure how tall the original trap was – and how much is buried under the shifting sands.

Louise Austin, of the Dyfed Archaeological Trust, said: ‘Fish traps were a widely used means of catching fish in the past which made a significant contribution to the economy of many coastal and estuarine communities. Today only a few are known to survive in Wales.’

These structure were so effective that their use in rivers was actually banned in the Magna Carta. Traps like this were only allowed along the coasts where stock was less likely to be depleted. 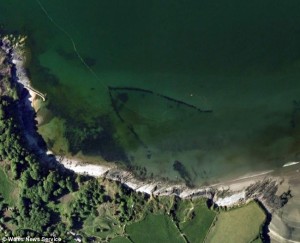