It’s called “Poodle With Bow, On Table” and is at least one of the oldest, if not the oldest. It’s a daguerreotype from the 1850’s, photographer (and model) unknown.

Look at the cuteness: 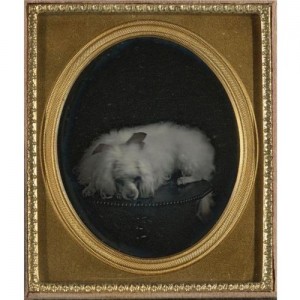 How did they get that poor creature to sit still for the ages it took them to take a picture in the 1850’s? It must have been heavily sedated.

This photograph is one of thousands going on the auction block next Monday at Sotheby’s New York. There are some extremely famous names among the artists, including the likes of Ansel Adams, Robert Mapplethorpe, Imogen Cunningham, Alfred Eisenstaedt and Edward Henry Weston.

Last year Sotheby’s sold an Edward Weston photograph for $1.6 million. The estimates for his lots this time around are far more modest, ranging from 5,000 to 30,000 dollars.

The highest estimate — $200,000 – $300,000 — goes to a László Moholy-Nagy portrait of Lucia Moholy, an extremely well-known photograph considered part of the artist’s seminal oeuvre.

You can browse the entire Sotheby’s sale — and it’s worth it — here.