The Newton Project has been working for over a decade on digitizing and transcribing the entire body of Sir Isaac Newton’s writing. In collaboration with the Cambridge Digital Library, which just a couple of weeks ago announced they had digitized and uploaded 4,000 pages of Newton’s works, the Newton Project aims to provide a holistic understanding of Newton’s oeuvre to counter our contemporary tendency to divide subjects — science, philosophy, religion, alchemy — along lines of demarcation that would have made no sense to Newton himself.

The featured document of January provides a beautiful at-a-glance example of Newton rail-hopping trains of thought. It’s from the Fitzwilliam Notebook, a private diary Newton kept between 1662 and 1668, when he was in his 20s and a student at Trinity College, Cambridge.

He opens with a list of all 48 sins he could remember ever having committed in his entire life up to Whitsun of 1662. Then he adds another nine committed after Whitsun 1662. All of these sins he wrote in code, and since he was Isaac Newton and we’re the rest of us, it wasn’t until 1964 that someone finally cracked it so we could know how naughty he’d been. (Four words have yet to be decoded to this day: Nabed, Efyhik, Wfnzo and Cpmkfe, written on the flyleaf.) 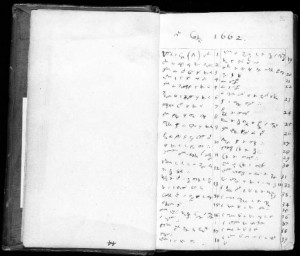 1. Using the word (God) openly
2. Eating an apple at Thy house
3. Making a feather while on Thy day
4. Denying that I made it.
5. Making a mousetrap on Thy day
6. Contriving of the chimes on Thy day
7. Squirting water on Thy day
8. Making pies on Sunday night
9. Swimming in a kimnel on Thy day
10. Putting a pin in John Keys hat on Thy day to pick him.
11. Carelessly hearing and committing many sermons.
12. Refusing to go to the close at my mothers command.
13. Threatning my father and mother Smith to burne them and the house over them
14. Wishing death and hoping it to some
15. Striking many
16. Having uncleane thoughts words and actions and dreamese.
17. Stealing cherry cobs from Eduard Storer
18. Denying that I did so
19. Denying a crossbow to my mother and grandmother though I knew of it
20. Setting my heart on money learning pleasure more than Thee
21. A relapse
22. A relapse
23. A breaking again of my covenant renued in the Lords Supper.
24. Punching my sister
25. Robbing my mothers box of plums and sugar
26. Calling Dorothy Rose a jade
27. Glutiny in my sickness.
28. Peevishness with my mother.
29. With my sister.
30. Falling out with the servants
31. Divers commissions of alle my duties
32. Idle discourse on Thy day and at other times
33. Not turning nearer to Thee for my affections
34. Not living according to my belief
35. Not loving Thee for Thy self.
36. Not loving Thee for Thy goodness to us
37. Not desiring Thy ordinances
38. Not long [longing] for Thee in [illegible]
39. Fearing man above Thee
40. Using unlawful means to bring us out of distresses
41. Caring for worldly things more than God
42. Not craving a blessing from God on our honest endeavors.
43. Missing chapel.
44. Beating Arthur Storer.
45. Peevishness at Master Clarks for a piece of bread and butter.
46. Striving to cheat with a brass halfe crowne.
47. Twisting a cord on Sunday morning
48. Reading the history of the Christian champions on Sunday
1. Glutony
2. Glutony
3. Using Wilfords towel to spare my own
4. Negligence at the chapel.
5. Sermons at Saint Marys (4)
6. Lying about a louse
7. Denying my chamberfellow of the knowledge of him that took him for a sot.
8. Neglecting to pray 3
9. Helping Pettit to make his water watch at 12 of the clock on Saturday night

Not terribly naughty for a man in his 20s, although he seems to have had an unfortunate penchant for beating on people, including his sister. The lying about a louse, though, that is truly unpardonable.

After the sin lists come the expense lists, a fascinating glimpse into his daily life. In between the books, laundry, clothes and school fees we see that he lost at cards twice, loaned money to his friends, had a few pints at the local hostelry, bought oranges for his sister (making up for punching her that time, maybe?) and putty for DIY repairs to his room.

Then naturally he moves on to right angle geometry, parabolas and hyperbolas.