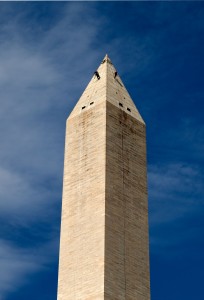 David Rubenstein, the billionaire co-founder of private equity company The Carlyle Group and an avid history buff, has donated $7.5 million to the Trust for the National Mall to repair the Washington Monument. In December Congress allocated $7.5 million to fund the repair on the condition that the National Park Service raise matching private funds. Rubenstein’s donation thus not only grants the restoration efforts a hefty sum in itself, but also assures the Congressional funding.

The 555-foot obelisk, built in 1884 to honor the first president of the United States, was damaged by the 5.8 magnitude earthquake that struck the capital on August 23, 2011. Early assessments found a large four-foot-long, one-inch-wide crack and a number of smaller cracks in the monument, so for safety reasons the monument was immediately closed to the public. Later more detailed assessments found the damage was even worse than they first realized.

The $15 million will go to repairing all of the direct earthquake damage. It’s not enough, however, to cover some of the other issues plaguing the monument, like extensive water damage to the interior from the cracks in the marble and lost mortar at the peak of the obelisk. Some of the marble panels up top were cracked all the way through. The monument also needs structural reinforcement to protect the tallest obelisk in the world against future freak earthquakes, so here’s hoping there are more billionaire history buffs lying around somewhere.

The Washington Monument continues to be closed to the public and it looks like it will remain closed for the next two years. The Park Service is taking bids from contractors now with the aim of starting repair work by the end of August. They expect the repair to take 10 months to a year to complete.

The National Park Service website has an incredible photo gallery of the earthquake damage and the assessments done by civil engineers from the Difficult Access Team of contractors Wiss, Janney, Elstner Associates, Inc. (WJE).

The Difficult Access Team is my new obsession. The WJE team did preliminary damage assessments of the Washington Monument, Jefferson Memorial and Lincoln Memorial the day after the earthquake. That work was done visually — by helicopter for the top of the obelisk — but they had to return to the Washington Monument to do an in depth investigation by rappelling off the top. These are engineers, mind you. They could spend their lives in an office drafting things, but instead they badassedly rappel down a 555-foot marble needle. Two of the four are women, so yay sisterhood! Here’s one of those women, engineer Emma Cardini, starting her descent on September 28, 2011:

If you’re wondering why they had to rappel this time instead of using a helicopter or scaffolding, according to NPS Acting Chief of Resource Management Jennifer Talken-Spaulding a detailed damaged assessment requires hands-on (literally) work. You have to be able to touch the stone, tap it, listen to the sounds it makes, see the condition of the mortar and marble. They also had to remove spalls, chunks of stone that have come loose and could pose a serious hazard to people on the ground. You have to do that by hand. Scaffolding takes a long time to build, and they wanted a thorough assessment of the damage before the cold winter set in.

This is what it looked like at the 500-foot level observatory when the earthquake hit. The shaking starts at 1:45, but watch the whole thing to see the security guard just hanging out and tourists walking around casually before things suddenly get hairy.

For more videos of the earthquake, damage and repair work on the Washington Monument, please visit the National Park Service’s videos page. That 4-foot crack up top looks truly awful from the inside. You can see the light shining through it and it’s huge.