Some time ago, I was wandering around the Internet nerding out over old things as is my wont when I came across the YouTube channel of a genius. Before my astounded eyes, professional hairstylist Janet Stephens recreated the hugely intricate hairstyle of Empress Julia Domna (170–217 A.D.), wife of Emperor Septimius Severus, using only period-appropriate tools and a sculpted bust of the empress as an example. No pins. No perms. No hairspray. Behold Janet’s amazing skills in action:

Naturally I watched the rest of her videos in quick succession. Then I secured a copy of “Ancient Roman Hairdressing: On (hair) pins and needles,” a paper she wrote that was published in the 2008 edition of the Journal of Roman Archaeology (JRA). The depth of her knowledge blew me away. She is fully conversant in the archaeology (including unpublished artifacts), ancient literary sources and published scholarship of Roman hairstyling, and not just Roman but Etruscan and Greek as well.

Her work in this field is unique because her experience as a stylist gives her particular insight into how hair works and what can be accomplished with what tools. She upends a number of assumptions — that Roman women must have used wigs to achieve their more elaborate hairstyles, that they used hairpins — and injects a whole new simplicity and accuracy to the very vocabulary of ancient hairdressing.

Virtually all commentators demonstrate modern technological biases that lead to anachronistic speculation: in both looking at images and interpreting literary passages, they assume that the Romans used the same hairdressing technologies as do moderns. In addition, not being hairdressers, they fail to understand the technical possibilities of the tools that the Romans did have at their disposal. I will analyze the physical capabilities of the single prong hair-pin in order to show the impossibility of its application in many contexts. As an alternative I will propose sewing needles, arguing that, as Roman women of the 1st c. A.D. abandoned vitta-based [(vittae were linen or woollen ribbons used to tie the hair together when arranging it)] coiffures in favor of more elaborate fashions, they used needles (artifacts well attested in antiquity) invisibly to stitch together the style’s various components.

And that’s just the second paragraph. The rest of the paper lives up to its promise and then some.

Her most recent video, Julia Domna: Forensic Hairdressing, a recreation of a later hairstyle of the hirsute empress, was presented to great acclaim at the Archaeological Institute of America’s Annual Meeting in Philadelphia earlier this month.

(Correction: I initially wrote she had done the recreations live, but that was my misunderstanding. In fact, Janet’s Julia Domna videos were running on a computer while four pre-styled mannikin heads, one at each stage of Julia’s hair loss as portrayed on coins, provided real-hair examples for the people attending to examine. A 4×8 foot graphic illustrated the probable progression of hair loss from one stage to another.)

Shocked and awed by her combination of scholarly research and styling craftsmanship, and cat-killingly curious about how all the elements came together, I asked Janet Stephens if she would submit to an interview and she has most graciously done so. 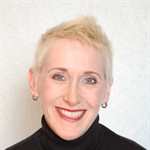 Q: How did you first begin to research ancient hairdressing?
A: My research began with a visit to the Walters Art Museum in 2001. They had just finished renovating the Greek/Roman collections and displayed a number of portrait busts at eye level, out in the center of the room, like a cocktail party. I had never seen the back of a roman portrait before—they are usually placed high on shelves/pedestal with the backs tight up against a wall. As I circled the portraits I saw the logic of the hairstyles and determined to try some at home. It was electrifying, can’t thank the Walters enough.

Q: When was the first time you tried to recreate a look and how successful was that initial foray?
A: I think it was my first day off after that visit! I pulled out a long haired mannikin to try out Julia Domna, type 2. I made it as far as the serpentine bun and hit a wall. Bobby pins and hair pins just wouldn’t do the job. It was all library leg work and practical experimentation after that.

Q: Your article in the JRA demonstrates an astonishingly thorough command of the archaeological record, and of primary and secondary sources relating to Roman hairstyling (and not just Roman, but also Etruscan and Greek). How did you master such a density of material?
A: Lots and lots of reading, poring over exhibition catalogs, back searching the footnotes to the reading and reading some more! It helped that I am fluent in Italian and, in 2006, I took a German for reading class. Working in my spare time, the research took 6 years.

Q: Did you do all this research on your own or through a school or other institution or …?
A: I am an independent researcher, but my husband is a professor of Italian at the Johns Hopkins University, so I have library privileges there. We are friendly with colleagues in the Classics/Archaeology department and at the Walters Art Museum. They were kind enough to send me articles and clippings, read drafts and help with some picky Latin, though I try not to impose.

Q: You say in the JRA article that sculptures tell you where to part the hair, what direction to twist it in, even whether the curl is natural or artificial. I’m particularly curious about the latter. How you can identify the source of the curl?
A: It helps to have a lot of hairdressing experience! This is a complex topic with room for much ambiguity. Identifying artificial curl on a statue requires a visual literacy similar to that necessary to distinguish a particular painter’s work by his brush strokes. It can be difficult to identify artificial curl today because of the vast array of hair care technologies available.

The Romans did not have the range of technologies that we do (electric dryers, plastics, cheap metal clips, air conditioning, hair spray), so changing the shape of hair was both risky (irons heated over fire) or time consuming (air drying wet hair so it takes on an unnatural shape can take many hours). How long these artificial curls might endure depended on climate and weather. I believe most Roman women made do with their natural curl patterns and avoided artificial curling.

But on Roman portraits, curls that are too neat, ribbon-like, evenly sized and orderly may be suspected as artificial. I always examine the entire hairstyle, looking for signs of wave or straightness. I look for signs in hairstyle components where curl would be irrelevant or counterproductive to the finished style, and I pay special attention to mismatches between one zone of the head and another. Artificial curls are arranged in strict rows or stacks, with a logic and consistency to their rotational direction, say clockwise on one side of the head and counterclockwise on the other. Natural curl tends to be chaotic and “frizzy”, there is usually a mix of different diameters of curl and they don’t always rotate in the same directions.

Q: Were you already an accomplished stylist by then?
A: Yes. I now have over 20 years professional hairdressing experience. I have also taught in an accredited beauty school and as a color educator for a major haircare company.

Q: Did you have to do a lot of trial and error to figure out how certain hairstyles were achieved?
A: Not really, once I realized they could be sewn together, the styles came together fairly quickly. Using high quality portrait examples is a must, though.

Q: Which ones were the most challenging and why?
A: The ones I do on mannikins are the hardest, because I have only my two hands to work with. A live model can follow directions or help out by holding on to a piece of equipment or hair. But in terms of sheer manual dexterity, the “beehive” (ca. 117 A.D.) is the toughest so far.

Q: I was surprised by how much hard science — like the isometric tension keeping bodkins in place and the anatomical requirements of hair length for any given style — was in your JRA paper. Are these factors you can calculate by observation or did you have to learn them by experimenting?
A: Hairdressers learn a lot of biology and anatomy during cosmetology training and we apply it every day in the salon. We all learn that certain hair lengths work better for certain styles. I prefer using vertebrae to measure hair length because it is precise but not dogmatic. I have used bodkins to dress my own hair and I use them to manage the long hair of clients. You become familiar with how they work and it just becomes a matter of finding ways to describe them.

Q: How did you find those unpublished needles in the Johns Hopkins collection?
A: The Johns Hopkins University has a very good archaeological collection and museum. Their gracious former curator, Eunice Maguire, helped me with the needles. There is a lot of unpublished material out there.

Q: How was your “Julia Domna: Forensic Hairdressing” presentation received at the Archaeological Institute of America Conference this year?
A: It seemed to create a a lot of buzz and people said they enjoyed it. It’s not every conference where you go to the poster session and see “heads on pikestaffs”!

Q: Is there anyone else doing anything like what you do?
A: Dr. Elizabeth Bartman (president of the AIA) and Prof. Katherine Schwab of Fairfield University have each employed hairdressers to recreate the hairstyle of Faustina the Elder and the ancient Greek Erechtheion caryatid hairstyles, respectively. But, so far as I know, I am the only professional hairdresser working as a scholar in her own right on the topic of ancient hairstyle recreation.

Q: Do you have any specific goals, attitudes you’d like to change or new approaches you’d like to establish in the archaeological community?
A: I would love it if all archaeological museums would display their sculptures out in the middle of the room instead of in niches and against walls! And I wish there were mirrors behind every small sculpture displayed in a case.

Q: For instance, creating consistent terminology (i.e., bodkins and needles instead of curlers/hairpins/bobby pins) standards in the scholarly literature?
A: That’s a great idea…and I would extend the concept to include technologically neutral descriptions of hair itself.

Q: If you could choose one ancient hairstyle or technique to bring back into fashion today, which one would it be and why?
A: Selfishly, I would love to see more women of every age wearing their hair as long as they can: that way I could find hair models more easily!

Inspiring, isn’t she? Not only is Janet Stephens an expert in her profession, but in just six years she taught herself to be an expert in the academic field of ancient hairdressing, maybe even the primary expert. Now run, don’t walk, to watch all of her videos and clamor for more.