Archaeologists have found a fragment from the head of a pre-historic lion figurine carved out of mammoth ivory 40,000 years ago. The body with one side of the head still attached was discovered in Vogelherd Cave in southwestern German in 1931. The other half of the head was found in the same cave in recent excavations spearheaded by the University of Tübingen.

Before the discovery of the additional head fragment, archaeologists thought the lion was a rare relief carving, worked only on one side. Many of the earliest figurative art in the world has been found in this cave and other caves in the area, and this lion was the only one-sided one. The new piece fits on the other side of the head and makes it a three-dimensional sculpture, bringing it in line with its bother and sister artifacts.

The new fragment was discovered when today’s archaeologists revisited the work of their predecessors from the 1930s. “We have been carrying out renewed excavations and analysis at Vogelherd Cave for nearly ten years,” says Conard. “The site has yielded a wealth of objects that illuminate the development of early symbolic artifacts dating to the period when modern humans arrived in Europe and displaced the indigenous Neanderthals.” He points out that the Vogelherd Cave has provided evidence of the world’s earliest art and music and is a key element in the push to make the caves of the Swabian Jura a UNESCO World Heritage site. 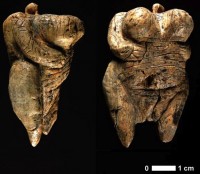 The Swabian Jura, also known as the Swabian Alps, has four caves just a hop, skip and a jump from each other — the Vogelherd, Hohlenstein-Stadel, Geißenklösterle and Hohle Fels — in which some of the oldest human art has been discovered. The world-famous Lion Man, the oldest figurative art known, was found in the Hohlenstein-Stadel Cave. One of the oldest musical instruments, a flute carved from the bone of a griffon vulture 35,000 years ago, was found in the Hohle Fels Cave (hear a replica of it played here). The oldest human figure known was also found in Hohle Fels, the pulchritudinous Venus of Schelklingen who is between 35,000 and 40,000 years young.

As the discovery of the lion head fragment underscores, these caves continue to produce artifacts of immense significance to our early history. I’m surprised the caves haven’t already been declared a World Heritage site.

The newly reconstructed 3D lion is on display at the University Museum in Hohentübingen Castle where visitors can also see the Venus of Schelklingen, an extremely cute mammoth and a dynamic horse among other ivory and bone figurines found in the caves.