An ancient tomb in Corinth has been found with an impressive collection of pottery. The tomb dates to between 800 and 760 B.C., very early in the city’s history. There’s evidence of settlement in Corinth as early as 6,500 B.C., but there appears to have been a significant loss of population from 2,500 B.C. until the Dorians settled there in 900 B.C. When the tomb was built, Corinth was ruled by a king from a Dorian kinship clan called the Bacchiadae. They began to build Corinth from a sparsely populated backwater into an influential center of trade, a process that continued after the kings were overthrown in 747 B.C. and replaced with a ruling council of aristocrats (still from the Bacchiad clan) who elected a new king yearly. By 730, Corinth would have several colonies and a population of 5,000.

The person buried in the tomb was certainly someone of note. A large limestone sarcophagus 5.8 feet long, 2.8 feet wide and 2.1 feet high was found inside the burial pit. Only a few fragments of bone remained inside, so we don’t know any physical details about the deceased. He or she was buried with several handsome pottery vessels around the sarcophagus, and another 13 were found almost intact inside a niche covered by a limestone slab.

The vessels were decorated with a variety of designs, including wavy, zigzagging lines and meandering patterns that look like a maze. This style of pottery was popular at the time, and archaeologists often refer to this as Greece’s “Geometric” period.

It’s the pottery style that dates the tomb. The geometric designs — zigzags, crosses, concentric circles around the neck, shoulders and body, crosshatched rectangles that look like block letters I doodled in my notebooks in junior high but aren’t letters, dots — decorate vessels of all shapes and sizes. This is the pottery that spread far and wide around the Mediterranean in the decades after the tomb was built when Corinth grew into a capital of trade as its position near the Isthmus of Corinth connecting the Peloponnese to mainland Greece made it a window to western colonies like Corfu and Syracuse.

We’re very fortunate any of the fragile treasures in this tomb survived at all.

Several centuries later, in Roman times, the tomb would almost be destroyed after a wall was built beside it. When archaeologists excavated that wall, they found a limestone column that may have originally served as a grave marker for the tomb. 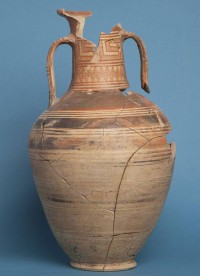 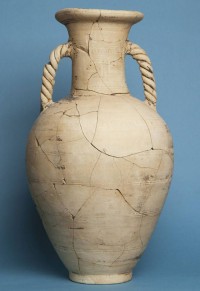