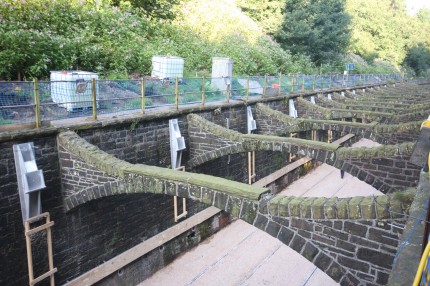 The Chorley Flying Arches are 16 flying buttress arches built in 1841 on the Bolton & Preston railway (opened in 1843) a mile and a half northwest of Chorley Station in Lancashire. These rare architectural features were used to brace the high retaining walls on either side of the cut. Scottish civil engineer Alexander James Adie, Resident Engineer of the Bolton & Preston Railway, feared the heavy clay soil behind the walls would eventually collapse them inwards onto the track, so he built masonry arches connecting to the walls at the 11-foot mark (the arches rise to 15 feet at the center point). Like their namesakes on Gothic churches, the flying arches strengthened walls under pressure without adding bulk. They were slender and elegant, the thickness of a single stone less than a foot wide across the center.

The Chorley arches were the first of their kind and today they’re one of only two examples remaining in England. The others were lost to modernization, and these could have succumbed to a similar fate had English Heritage and Network Rail not come together to save them. In 2008, the Chorley track was in dire need of stabilization as drainage problems had forced trains that can run 145 miles per hour to slow way down to a maximum speed of 20 mph. To properly install new drains, the arches had to be taken down. Steel arches were wedged between the walls first, then the Victorian masonry arches were removed intact and taken to a secure storage site.

The original plan was to reinstall them within three years, but in 2009 a new project to electrify the line was announced. Electric trains require overhead wires to power them, and 173-year-old masonry arches were bound to get in the way. Engineers came up with a solution, however, that preserved the original structures while bringing them in compliance with modern safety and operation standards. Each arch was dismantled stone by stone and rebuilt atop a custom steel brace. This ensures they won’t be shedding masonry onto the trains below. The steel brace will also accommodate the overhead electrical lines.

Earlier this week, the Chorley Flying Arches returned home after seven years in storage. They were placed in a slightly higher position to make room for the electrification equipment, and now their role is entirely aesthetic. The steel brace underneath them will do the work of stopping the retaining wall from falling in on commuters.

Here’s a riveting time-lapse video of the 2008 removal of the arches. An equally cool video of the reinstallation is not yet available, but Northern Rail is into that sort of thing, so keep an eye on their YouTube channel.