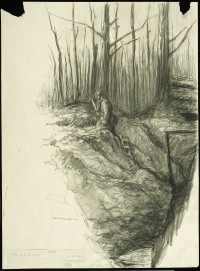 When the United States joined World War I, the War Department commissioned eight accomplished artists to go to France with the American Expeditionary Forces and sketch what they saw. Illustrators William James Aylward, Walter Jack Duncan, Harvey Thomas Dunn, George Matthews Harding, Wallace Morgan, Harry Everett Townsend, architect and etcher J. André Smith, and illustrator and muralist Ernest Clifford Peixotto were given the rank of captain in tn the Army Corps of Engineers and sent to the Western Front in 1918.

This was the first time the US put official artists in the field and the AEF artists had a specifically documentary brief. Their job was to make a visual record of the people and activities on the front lines.

Throughout 1918, prior to the war’s end in November, the artists produced some 700 works, ranging from charcoal sketches to completed ink or watercolor compositions. Bart Hacker, a curator at the National Museum of American History, says the artists depicted four types of scenes: soldier life (washing up, meal time); combat, aftermaths of war (destroyed churches, devastated fields); and technology. In one image, wounded men carry the fallen through trenches and barbed wire. In another, soldiers on horseback travel through a destroyed French village. Notably, Hacker says, the artists did not depict dead bodies. 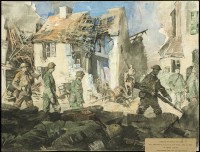 That isn’t entirely true. They did not depict Allied dead, perhaps, but there are German dead. No blood or gore, however, not even in the field hospital scenes or in combat actions. So their work was meant to document the front, yes, but not the horrors of war in an explicit or even impressionistic way. These images were going to be shown to the public, after all, and bodies torn apart by artillery don’t really sell a war or reassure worried loved ones.

When the artists completed their sketches and watercolors, the pieces were sent to the War Department in Washington, D.C. where some of them were exhibited immediately. Works deemed to be incomplete were kept for the artists to finish upon their return. In January of 1920, the collection was given to the Smithsonian for exhibition. The drawings were put in storage in 1929 and have only been exhibited a handful of times since then. 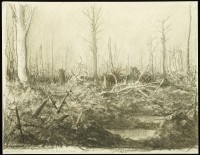 This year’s centenary of the start of World War I has brought new attention to these works. The American History Museum has digitized the Smithsonian’s collection (there are a few pieces in other museums) and made them available for browsing in high resolution on its website. They may go on public display once again in 1917, the centennial of America’s entry into the war.

While I’m on the subject of the Smithsonian and digitization, the institution has just launched a massive transcription project asking volunteers to sift through millions of images of documents, artifacts and natural history specimens in its collection and transcribe them to make these invaluable resources searchable. Beta testers took days to convert handwritten notes and archives into searchable text that would have taken Smithsonian employees months to complete.

All you have to do is register here, then activate your account by clicking the link in an email they send you and setting your password. Once you’re logged in, go to the Transcription Center and pick your project. Quite a few of the first round of projects are complete but you should look through them anyway because you can enjoy the transcripts which can be browsed page by page or downloaded in their entirety. You can transcribe pages that haven’t been done yet or you can review transcriptions that others have done.

Bookmark the site and check back regularly for new projects.