The hoard of 159 Roman gold coins discovered near St. Albans, Hertfordshire, in the fall of 2012 has been acquired by St. Albans’ Verulamium Museum. The first 55 coins were unearthed on September 23rd by first-time metal detectorist Wesley Carrington who found the first coin seven inches under the surface just 15 minutes after beginning his search. After consulting with the owner of the shop where he had bought his metal detector, Carrington reported the discovery to his local Finds Liaison Officer. On October 1st, Carrington returned to the site with a team of archaeologists from St. Albans City and District Museums Service and they found another 104 coins.

The coins are all 22-carat gold solidi from the late 4th and early 5th century struck in Milan, Ravenna, Rome, Trier during the reigns of Emperors Gratian, Valentinian II, Theodosius I, Arcadius and Honorius. Although they were found all over the field, archaeologists believe that’s the result of a couple of centuries of farming scattering the cache, that the solidi were originally buried together in a now-lost container. Their rough treatment by one or more ploughs has left surprisingly few marks on the coins. They are in pristine condition. 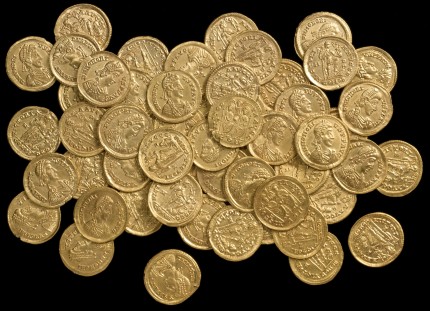 Gold solidi were enormously valuable coins. By law they could not be spent on retail market goods, but only for large purchases and deals like property sales and entire ship’s of goods. Whoever owned these coins was very wealthy, a merchant or a banker. The last coins to arrive in Roman Britain from the continent came in 408 A.D., two years before the army withdrew leaving the province to deal with the descending chaos on its own. One of the ways they coped was to bury their valuables to keep them safe from pillagers until they could reclaim them, which is likely what happened here. It could also have been buried as a sacrifice to the gods, but it’s on the generous side for a votive, to put it mildly.

After the discovery of the hoard, the coins were examined by an independent panel of experts at the British Museum. Based on the panel’s report, a coroner’s inquest in July of 2013 determined that the hoard was treasure according to the UK’s Treasure Act. The British Museum panel then assessed fair market value of the coins at £98,500 ($150,000) and the relevant museum closest to the discovery spot, in this case the Verulamium Museum, was given the opportunity to acquire it for that amount.

They raised it and then some. Thanks to a sizeable Heritage Lottery Fund grant of £105,000, £24,000 from an overseas benefactor who prefers to remain anonymous, £11,000 from the St. Albans Museums and Galleries Trust and £6,000 from the Council, the museum was able to secure the hoard and some funding to create a display worthy of their rarity and beauty. The coins will go on display at the museum in September.