In the early days of the American Revolution, the northern border with Quebec was of great strategic importance as a potential entry point for British troops. After some initial successes like Benedict Arnold and Ethan Allen’s capture of Fort Ticonderoga on May 10, 1775, the Continental Army launched a pre-emptive invasion of Quebec. They captured Montreal on November 13th, 1775, and moved on to attack Quebec City where they were soundly defeated on December 31, 1775. By spring of 1776, the Continental Army had retreated out of Canada back to Fort Ticonderoga.

Licking their wounds and anxious to prevent the British from traveling south via the Hudson into New York, Continental Congress ordered the construction of a fleet of 15 ships to replace the ones Arnold had destroyed to keep them out of British hands. At Skenesborough (present-day Whitehall) in upstate New York at the head of Lake Champlain, Hermanus Schuyler, the assistant deputy commissary general of the Northern Department, oversaw the construction of four galleys and eight gundalows, larger and armed versions of the flat-bottomed cargo boats used for transportation across the lake. It was the summer of 1776 and this was the first American Navy. 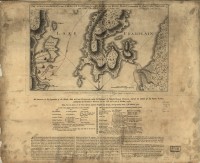 Commanded by Benedict Arnold, who as a civilian had captained his own ships as a successful merchant in the West Indies trade, the small fleet patrolled Lake Champlain getting in the way of the British invasion. On October 11th, 1776, most of the fleet met its end at the Battle of Valcour Island, but not before fighting the larger and much fancier British fleet to a standstill. One of the fatalities was the Philadelphia, a 54 foot, 29-ton gundalow armed with one 12-pounder cannon, two 9-pounders and mounts for up to eight more swivel guns. It was struck by a British cannonball and sank to the floor of Lake Champlain.

For 160 years the Philadelphia rested in the frigid embrace of the northern waters. In 1935 civil engineer and World War I veteran Lorenzo F. Haggulund, who had discovered Arnold’s flagship the Royal Savage in 1932, found the Philadelphia sitting straight up on the bottom of the lake. It was in excellent condition, considering the beating it had taken a century and a half earlier. The mast was missing its top but was otherwise still in place, as were the timbers of the hull. So much of it remained that there were three clear holes shot into the hull, one of them with the 24-pound cannon ball still lodged inside it. That was the proverbial smoking gun, the actual hit that took down the ship still in place after all those years. Hundreds of artifacts from tools to clothes to cooking gear and human remains were also found.

Using a system of slings and spreaders, Haggulund raised the wreck on August 2, 1935. Here is footage of the raising of the Philadelphia, its incredible white pine mast standing proud:

Haggulund put the Philadelphia on a barge and exhibited her at various places on Lake Champlain and the Hudson River. He continued to search for other wrecks from the fleet but only made one more find: a gunboat he raised in 1952. He was unable to secure funding to maintain and display the gunboat and it soon decayed and was picked away at by looters until there was nothing left to display. 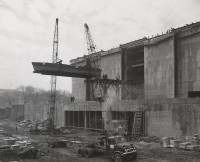 In the wake of that sad loss, Hagglund approached the Smithsonian Institution to see to the long-term safety of the Philadelphia, and in 1961, bequeathed her and associated artifacts to the SI where they were thoroughly studied. When the National Museum of American History opened in 1965, the Philadelphia was on display.

Conservation of the wreck is an ongoing problem, and since visitors to the museum can only observe it from the front and over its decks, in 2013 the Smithsonian made a digital 3D model of the Philadelphia. For curators, it gives them the tools to ensure the ship’s stability and preservation. For the rest of us, the model gives us the opportunity to virtually explore the floating gun platform that was deployed against the might of Britain’s navy.

You can click and drag to change the angle of the model. Scroll to zoom in and out. Be sure to click the dropdown menu on the top left to view the model fullscreen. Once you’ve done that, click the globe icon of the expanded left menu and select “#1 Gunboat Philadelphia Overview” to kick off the guided tour. It takes you through the different parts of the ship, its design, its weapons, the cannonball that took it down and more.

Edit: I’ve removed the embedded 3D model because it may cause mobile devices to crash. Here again is the link to it.