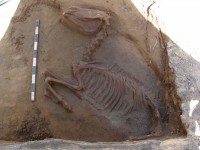 An archaeological excavation on the site of future construction in St. Augustine, Florida, has unearthed the intact and articulated skeleton of a small horse. The remains have not been radiocarbon dated yet, but fragments of ceramic pieces in the layer alongside the horse are from the late 18th century. It’s the only horse burial ever found in the colonial downtown district of the city.

The site once housed the Spanish Dragoon barracks in a pre-existing two-story early Spanish structure. The dragoons and their stables were there from 1792 until the waning days of Spanish control. The deteriorating buildings were razed in 1822 but the dragoons were long gone by then as Spain formally ceded Florida to the United States in 1819. The horse was therefore probably a mount belonging to a dragoon officer, which explains its careful burial.

“I think there’s reverence here,” [St. Augustine archaeologist Carl] Halbirt said. “They actually laid it out on its side with the legs folded in the chest area. That’s a sign of reverence.”

It was once a companion that meant a lot to a St. Augustine man – a dragoon – who relied on it.

“It was a cavalry man’s life,” [colonial cavalry researcher Amanda] LaPorta said. “They were a special kind of soldier. The horse was their best friend. It was all important to them.”

LaPorta thinks the small size of the horse indicates it was a Marsh Tacky, one of several horse breeds descended from the Iberian horse stock the Spanish brought to the Americas. At less than 15 hands (about five feet) at the withers, the petite horse was agile on Florida’s swampy terrain, easy to house and feed. There are other Colonial Spanish Horse breeds, however, that are just as small as the Marsh Tacky — for example the Banker horse and the Florida Cracker Horse — so only DNA testing can determine its breed with certainty.

The horse skeleton has been removed from the site and will be kept at St. Augustine’s archaeology lab.

St. Augustine is the oldest permanent European settlement in the United States, but its history long predates Columbus. Archaeological investigations in the area have discovered 3,000-year-old shell middens. In the city itself, Native American artifacts and human remains have been found dating to between 1100 and 1300 A.D., and when the Spanish arrived in the 16th century, they found well-established Timucua towns. St. Augustine was founded in 1565 by Spanish governor Don Pedro Menéndez de Avilés in a section of the Timucua town of Seloy. According to Spanish accounts, at first relations between the Spanish and Timucua were friendly — the locals allowed the Spanish use of their homes and territory on the site of what is now the Fountain of Youth Archaeological Park — but soon the Spanish outstayed their welcome and relations grew strained. After less than a year, the Spanish moved across the bay to Anastasia Island. In 1572 they moved back to the mainland to what is now the downtown St. Augustine area.

St. Augustine was the capital of Florida for 259 years, through the entire duration of Spanish rule, the period of British control from 1763 until 1783, and the early American era until it was moved to Tallahassee in 1824. Because of its unique and long history, the city of St. Augustine has extensive heritage protection regulations. Its Archaeology Preservation Ordinance requires that all “subsurface disturbances” (ie, ground-penetrating construction), whether on private or public land, are subject to archaeological review for their potential effect on buried history. It has a city archaeologist, currently Carl D. Halbirt, who performs reviews, archaeological surveys before construction and test excavations and monitors all ongoing construction in case it turns up anything that needs further investigation or salvage. This archaeology-focused approach is relatively common in European countries, but it’s a regulatory unicorn in the US where generally people can do whatever they want on private property even in places that are famously packed with ancient remains.