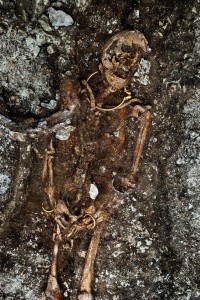 The excavation of the princely tomb from the early 5th c. B.C. unearthed at Lavau in France’s Champagne region was completed a few days ago. Archaeologists from France’s National Institute for Preventive Archaeological Research (INRAP) have now published more about what they found in the richly appointed grave.

The deceased is laid out in the center of the tomb, head oriented south, with his two-wheeled chariot. The prince wears a torc in solid gold weighing 580 grams (1.28 pounds), significantly heavier that 480-gram 24-carat gold torc in the Lady of Vix grave discovered in 1953 about 40 miles south of Lavau. This rigid neck ring is richly decorated in a double motif of winged monster, extended by pear-shaped stamps. On his wrists are gold bracelets while his bicep is encircled by an lignite armlet. Near the nape of his neck are several finely worked amber beads, the remains of a necklace or hair ornament. There are also very rare surviving organic remains from his clothing. Archaeologists found two iron and coral hooks attached to fragments of leather and a row of rivets — remnants of the collar from his top — bodkins and bronze hooks from his shoes.

The largest and most elaborately decorated find — the bronze cauldron three feet in diameter adorned with four circular handles attached to the head of Greek river-god Achelous and eight lion heads around the rim — is part of a wine set that includes the Attic black figure ceramic oinochoe, perforated spoon and smaller bronze vessels found inside the cauldron. It’s Greco-Latin in manufacture and was probably the centerpiece of an aristocratic Celtic banquet.

The Lavau burial has several elements in common with the Lady of Vix, including the huge and hugely fancy banquetware. It dates to around 500 B.C., on the cusp between the end of the Hallstatt and the beginning of the La Tène period. She too was buried with exceptionally rich grave goods of Greek and Celtic extraction: a bronze volute krater of immense size — 5’4″ high, 290 gallon capacity, 450 lbs total weight including base and lid — which is the largest metal vessel from Classical antiquity known to survive, an oinochoe wine jug (although the Vix one was bronze while Lavau’s is black figure ceramic with a gilded rim and foot) a two-wheeled chariot, a heavy gold torc and jewelry with amber beads.

Another slightly later tomb (mid-4th century B.C.), that of the Princess of Reinheim, unearthed near Saargemünd, Germany, just across the border with Lorraine, also has similar grave goods: a gold torc around her neck and gold bangles on each wrist, amber beads by her side (once held in a long-decayed wooden jewelry box, perhaps), and an expensive beverage set composed of a large bronze flagon (1’8″ high), other bronze basins and the remains of gold fixtures thought to be from drinking horns.

The Lady of Vix’s remains were almost completely decomposed. She was deemed a lady because even with all the priceless treasures interred with her none of them are weapons. The same conclusion was drawn from the lack of a weapon in the grave goods of the Princess of Reinheim whose skeletal remains were annihilated by the acidic soil, but modern archaeology is reluctant to draw firm conclusions on sex based on the nature of the grave goods. A knife still in its sheath was found in the Lavau grave, but Celtic women were known to have fought, so we can’t assume the prince is not a princess. The bones that have survived are in very poor condition so it’s not possible to determine the deceased’s sex just by observation. Unlike with the Lady of Vix who was unearthed in 1953, modern archaeology may be able to make the determination by other means (DNA testing, stable isotope analysis).