This summer, a metal detectorist scanning a field at Agdenes farm on Norway’s Trondheim Fjord unearthed a piece of bronze jewelry. The well preserved object is a bird-like figure with intricate designs representing fish or dolphins on each wing. The decoration identifies it as being of Celtic origin, probably Irish, made in the 8th or 9th century. The Irish craftsmen made it as a fitting for a horse harness, but at some point it was converted into a brooch, as attested by a hole at the bottom and rust from where the pin was attached to the back. This second stage was the work of Vikings who often converted loot from their raids into jewelry for their loved ones.

It was almost certainly buried with a woman. Similar pieces have been found before, almost all of them in women’s graves from the first half of the 800s, the early years of the Viking incursions on the British Isles. Unfortunately the grave itself was not found. The object was ploughed up and scattered in the 1200 years since it was buried, and the grave in all likelihood has been destroyed.

Experts at the Norwegian University of Science and Technology (NTNU) University Museum analyzed the brooch and found traces of gilding, so the green bronze was once shiny gold, a coveted prize for a raider, and a very fine present for any raider’s lover or family member.

Being part of the early Viking raids brought status and prestige to the individuals who participated, but also to their families. The men who returned alive from the dangerous journeys gave the objects they had stolen as gifts to female family members who waited for them at home. The fittings were then turned into jewellery, and were worn on traditional Norse clothing as brooches, pendants or belt fittings. 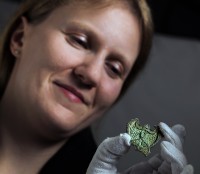 “As a result, it became clear to everyone that those women had family members who had taken part in successful expeditions far away. There are traces of gold on the surface of the jewellery, so it was originally covered in gold. That made it appear more valuable than it actually was. In addition, each piece of jewellery was unique, so the owner did not risk having the housewife next door turn up with the same piece of jewellery,” [NTNU doctoral student Aina Margrethe] Heen Pettersen says.

Jewellery of this kind has typically been found in women’s graves with relatively few other burial gifts. This suggests that many of the Vikings who took part in raids far away did not represent the top layer of the social hierarchy. Instead, they were “nouveau riche” farmers and fishermen who got the opportunity to climb the social ladder by taking part in Viking raids.

The area where the brooch was found is mentioned in some of the sagas as a rallying point for ships and raiders setting out from the south end of the mouth of the Trondheim Fjord for the British Isles. The remains of a 12th century harbour built by King Øystein have been found next to Agdenes farm, so the location was of signficant strategic importance by then. The discovery of the brooch confirms that the site was populated and benefitted from raiding wealth centuries before Øystein’s harbour was built in the dawn of Viking engagement with the British Isles.