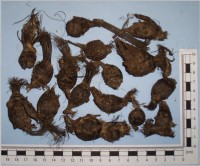 Archaeologists have discovered a prehistoric garden with 3,800-year-old tubers still in situ near Vancouver, Canada. This is the first direct archaeological evidence that the Holocene hunter-gatherers of the northwest coast cultivated plants as well as hunting and gathering it. The site, discovered during road work, was low-lying wetland 6,000 years ago. The anaerobic soil preserved the remains of an astonishing 3,768 wild wapato tubers (Sagittaria latifolia), also known as Indian potatoes.

Wapato tubers were a dietary staple among the indigenous people of the Fraser and Columbia rivers — the garden site is in what is now the Katzie First Nation territory — and were recorded by early ethnographers. Harvested between October and February, the tubers provided much-needed sustenance during the coldest of the winter months when supplies were scarce. The newly discovered ones long predate any such records, of course, and even the waterlogged soil couldn’t keep them in eating condition for close to 4,000 years. They’re black and brown now, although some the starchy interiors of some of the roots have survived.

Adjacent to the wetland garden is a dry site on a sandy ridge that contains the remains of two rectangular dwellings dating to the Middle Component (5,300–4,250 years before the present) and a fire pit that was so actively used during the Middle and Late Component (4,100–3,200 B.P.) that archaeologists unearthed more than 12 metric tons of fire-altered rock (FAR). Late Component artifacts were also found at the dry site, including more than 90,000 stone beads. 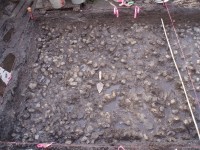 The tubers were wild plants, not domesticated, and wapato plants can grow deep underground all on their own. It’s an assemblage of rocks that makes it clear that this site wasn’t just a very prolific wild potato patch, but a cultivated wetland garden ingeniously customized by the indigenous people of the area to enhance harvest yields. The key evidence of cultivation is the rock pavement which is too uniform and densely packed to have been the result of natural processes like water carrying small stones to the lowest lying land. Archaeologists also found fragments of 150 fire-hardened wood tools, some still embedded in the rock pavement, used to harvest the tubers en masse.

The rock pavement controlled the depth to which the wapato rhizomes could penetrate, allowing harvesters to more easily locate and release the tubers from the mucky substrate. The context, breakage pattern, and direct association with the rock pavement suggest that the wooden tips are the distal ends of digging sticks. Their stratigraphic provenience and orientation imply that wapato harvest involved pushing or thrusting digging sticks into the pavement, where a prying or rocking motion was used to break the wapato tubers free from the mat of rhizomes and muddy substrates. Once released, the tubers would float to the water’s surface. When thrust through the pavement or caught between the pavement stones, some of the digging sticks broke and the tips of the fractured sticks were left in situ or discarded in the adjacent midden area.

The rock pavement in the garden is made of mixture of fire-altered rock and cobbles. It’s likely that the FAR were first used in the large hearth pit on the dry site and then recycled after they’d been shrunk by fire to too small a size for use in roasting. This was nothing if not an efficient system. Radiocarbon analysis of the fire-hardened wood found at the wetland garden indicate it was in use 3,800 years ago. By 3,200 years ago, it had been abandoned, thousands of tubers left in their watery garden for archaeologists to find.

You can read the full report on the site published in the journal Science Advances here.