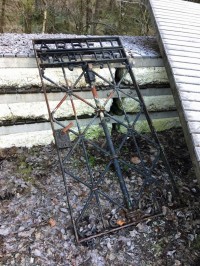 The wrought iron gate with the slogan “Arbeit macht frei” stolen from the entrance to the Dachau Concentration Camp on the night of November 1-2, 2014, has been found in Norway. After receiving an anonymous tip, police found the gate in a parking lot near a shooting range in Ytre Arna outside Bergen. It was hidden under a tarp with assorted trash and has apparently been outside in the elements for some time. One anonymous witness told a newspaper that he had seen the gate in a trench in Ytre Arna several months ago.

The police could not confirm the length of time the gate had spent outside. Their forensic examination of the door yielded no clues to the identities of the thieves, no DNA, no magical trace evidence to send through an exotic piece of equipment. The Bergen police are continuing to investigate, as is the Bavarian police.

Police in the southern German state of Bavaria, where Dachau is located, confirmed the gate had been found.

“From the picture transmitted, police believe it is highly likely that this is the iron gate that was stolen from Dachau,” it said in a statement.

Bergen authorities will return the gate “as soon as possible.” As the investigation is ongoing, the evidence of the crime is subject to judicial review before it can leave the country. It’s likely the judgement will be in favor of immediate restoration given the historical significance of the object.

The President of the Comité International de Dachau, General Jean-Michel Thomas, took note of this news with great satisfaction, stating, “Even though we still do not know what was behind this outrage, I offer thanks in the name of the survivors’ association for the discovery of this crime and the international concern that was shown following its perpetration.”

Dr. Gabriele Hammermann, Director of Dachau Concentration Camp Memorial Site, was also very relieved and offered thanks to the police in Norway and Germany for their meticulous investigations. “Dachau Concentration Camp Memorial Site, along with the survivors and their relatives, is delighted that the background to this act is now being cleared up and that this particularly symbolic relict of the concentration camp will once again be returned to the memorial following a judicial review. Of course, it will be presented to the public again once the restoration work is completed. A decision will be made together with the Stiftung Bayerische Gedenkstätten (Bavarian Memorial Foundation) regarding the placement of the gate, whether at its former location or as part of the permanent exhibition.”

The Director of the Bavarian Memorial Foundation, Karl Freller, was overjoyed at this news, and responded by saying, “It is a great relief to me that this piece of original evidence of the Nazis’ cynicism and contempt for humankind has been recovered. I congratulate the security authorities on their transnational success.”

Not quite original, actually. The original iron gate was made by Communist political prisoner Karl Röder in 1936 by order of the SS. It was removed after the war and a historically accurate replica created from photos of the original was installed when the Memorial Site was created in 1965. After the theft in 2014, another replica was made and put in place so it would be for solemnities marking the anniversary of the camp’s liberation by the U.S. Seventh Army’s 45th Infantry Division on April 29th, 1945.