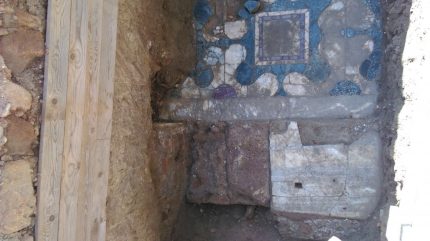 Archaeologists have discovered the remains of an opulent imperial-era residence on the banks of the Tiber near the Milvian Bridge. The site was found last November during a preventative archaeology survey in advance of utility works, but excavations were suspended and trenches filled in out of concern that the seasonal rise of the water level in the Tiber would damage the ancient remains.

Excavations have started again in the spring. Only a fraction of the structure has been unearthed and the team still sin’t certain whether it was a villa or smaller private dwelling. The part that has been exposed is contains mosaic floors in the luxurious opus sectile, a mosaic style which used polychrome marbles instead of the small, even tesserae tiles, arranged in a variety of floral, geometric and figural shapes. The floors in this building feature floral motifs, at least the ones revealed so far.

They are of exceptional quality, the colors of the marbles vivid and diverse. The homeowner must have spared no expense. It is incongruous, however, that such a high-end edifice decorated in precious materials would have been built so close to the bank of the Tiber. 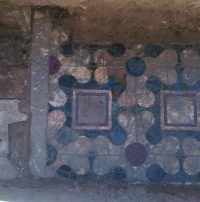