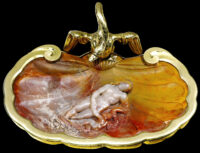 The Louvre has launched a fundraising campaign to acquire an exquisitely carved Italian Renaissance agate cameo of Venus and Cupid that once belonged to Louis XIV. If the campaign succeeds, the cameo will be reunited with its original carved stone and silver-gilt cup for the first time since it disappeared into private collections after the French Revolution.

Carved in meticulous detail from a single agate stone from Graubünden, Germany, the cameo depicts Venus at languid rest on a shell (the one she was born in, perhaps) with her son Cupid curled up next to her holding her hand. The carving takes full advantage of the natural color variations and swirls of the agate to set Venus’ pearlescent pale skin against the rich ochres of the shell underneath her. The cameo is rimmed with a silver-gilt border and a gilt swan, neck elegantly curved, wings outstretched, overlooks the loving scene of mother and babe. 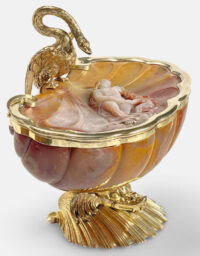 It was made in the early 17th century by Giovanni Ambrogio Miseroni, scion of a Milanese family of hardstone carvers whose works were prized among the aristocracy and nobility of Europe for hundreds of years. (Holy Roman Emperor Rudolf II was so pleased with their work he ennobled Giovanni and his brothers around the same time this cameo was carved.) Miseroni mounted the cameo as a lid onto a carved agate cup which was a hardstone masterpiece in its own right.

The cameo first appears on the historical record in 1661 in the inventory of the massive collection of Cardinal Jules Mazarin after his death. The inventory listing describes the vessel  thus:

A large shell-shaped cup carved from a single piece of German agate, upheld by a silver-gilt dolphin placed on a shell that is also of silver gilt, with another large German shell as its lid, also shell-shaped, carved with a nude Venus lying on a drapery next to a small Cupid and decorated with a silver-gilt rim.

It was one of the three most valuable vessels in the Mazarin collection, and Louis XIV acquired all three of them after the Cardinal’s death. They were in the royal collection until 1796 when they fell victim to a shortsighted (to put it mildly) scheme by the Revolutionary government to pay off creditors in kind with objects from the onetime royal collection. The Miseroni cup disappeared into a private collection, untraced and unpublished, for almost 200 years.

During that time, the cameo was detached from the cup. The cup emerged at auction on its own in 1968 and was acquired the Louvre. It has been on display with other masterpieces of hardstone art in the Galerie d’Apollon ever since. 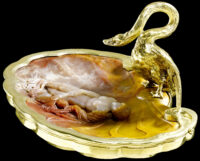 Because the cameo disappeared without a trace long before it could be photographed, it was only known from written descriptions. When the lost cameo was included in a 2001 catalogue of the hardstone vessels in the royal collection, the owner recognized it from the description. It was sold at auction in London in 2011 and the Louvre tried but failed to buy it then. Now it has another bite at the apple, and the museum is aiming high so it doesn’t get outsold this time. The total price is 2.6 million euros. The public fundraising goal is at least one million euros before February 25th. Click here to contribute.