A 6th century mosaic floor featuring peacocks and an Greek inscription has been discovered in Arsuz, a town in Hatay Province, southern Turkey. The floor was part of the Church of the Holy Apostles, a Byzantine-era basilica, and was commissioned by a freed slave who thanked God for his manumission in the inscription.

The remains of the Church of the Holy Apostles first emerged in 2007 when landowner Mehmet Keleş was planting saplings in his orange grove.

Subsequent excavations revealed a three-aisled basilica church with mosaic floors, stone graves and human remains. A mosaic inscription identified the site as an ancient church dedicated to the apostles. There is evidence it was in use through the 12th century.

Located on the Gulf Issus 70 miles from the great city of Antioch, Arsuz was founded during the Hellenistic era and by the 1st century B.C. when it was

annexed by Rome, it was an important port city on the Mediterranean coast of what is today Turkey. It became a regionally significant religious center in late antiquity, the seat of a bishopric and home to a monastery founded in the mountains outside the city by the ascetic hermit Theodosius of Antioch.

The mosaic with peacocks and the inscription were discovered in the most recent dig season and the excavation is ongoing. Eventually, the Hatay regional government plans to build a roof over the remains and open it to visitors as an open-air museum. 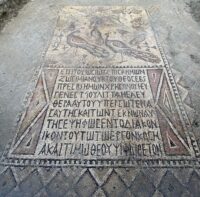 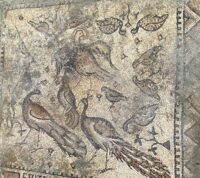