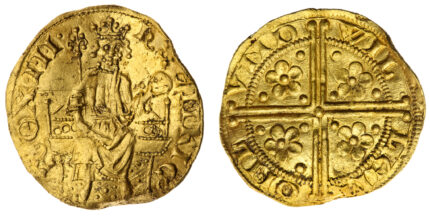 The coin was found in a field in the village of Hemyock in Devon by Michael Leigh-Mallory, a metal detector aficionado who had just returning to the hobby after stopping for a few years when his children were born. He reported his find to the Portable Antiquities Scheme, but he didn’t realize how important the coin was until he posted a picture on Facebook and it was recognized by numismatist Gregory Edmund of auctioneers Spink & Son.

The penny depicts the crowned and enthroned king holding a scepter and globe on the obverse. It is inscribed “H / ENRIC / REX III” . The reverse features a long voided cross with five-petal rosettes and three pellets in each field between the cross arms. It is inscribed “WIL / LEM / ON L / UND,” referencing the name of the moneyer Willem of Gloucester (also known as Willem Fitz Otto) and the London mint where the coins were struck in 1257.

Henry III’s penny was the first gold coin issued by a king of England since Edward the Confessor (1042-66). Edward’s gold coins were more like medallions, however, intended for use as presentation gifts. Henry’s gold penny was an actual circulation coin valued at 20 pence.

About 52,000 gold pennies were minted, but they did not get much use because they were widely believed to be undervalued, that the gold weight alone was worth more than the struck coin. They were soon withdrawn from circulation and a decade later Henry bought back the coins for 24 pence each and melted them down. No more gold coins would be minted in England for circulation until 1344 in the reign of Edward III.

The winning bidder is a UK private collector who has chosen to remain anonymous. The good news is he plans to loan the coin permanently to a museum.