In 1990, excavators found a Chi-Ro amulet in a Roman grave in Shepton Mallet in Somerset. The find was explosive: the amulet marked the grave as the earliest Christian burial in Europe, which would redraw the map of the spread of Christianity.

The city of Shepton Mallet named a street and a theater after the amulet. The Archbishop of Canterbury wore a reproduction of it around his neck. 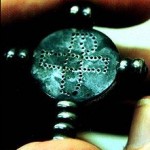 Then people started to actually, you know, study it. The British Museum’s tests at the time were inconclusive. Now the University of Liverpool has tested the amulet with the latest and greatest technology, and declared it a fake. The amulet is not Roman at all.

It’s barely even old. Hell, it looks like a Coke bottle cap someone took a finishing nail and some craft store beads to, although at least one theory suggests actual silversmiths and actual Roman silver were involved.

The amulet is now thought to be a modification of a Roman brooch dug up in Sussex 100 years ago. New technology has allowed experts to analyse the composition of the amulet in more detail than was previously possible. Samples of metal taken from the amulet were analysed by the university which found them to be consistent with silver produced in the 19th century or later.

So it’s a blend of the old and the new, it seems, put together by fakers with nebulous motives.

9 thoughts on “Fake comes for the Archbishop”