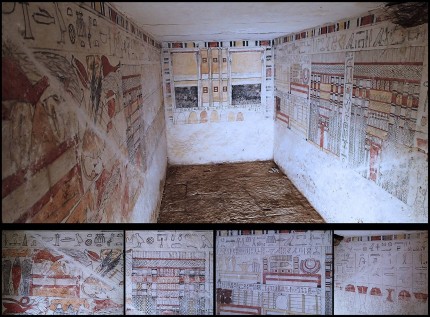 Archaeologists excavating the site of Tabit El-Geish, south of Saqqara, have discovered two vividly painted tombs from the reign of 6th Dynasty pharaoh Pepi II (2,278–2,184 B.C. [yes, you read that right, a reign of 94 years, although the end date is disputed so he may have “only” reigned 64 years]). The discovery was made by the mission of the Institut Français d’Archéologie Orientale (IFAO) under the direction of Dr. Vassil Dobrev in collaboration with the Egyptian Ministry of Antiquities.

The paintings decorate the walls of the limestone burial chambers and they are in excellent condition, their colors still bright more than 4,000 years after they were painted. Ankh Ti’s burial chamber paintings depict scenes of offerings to the gods including seven large jars used to contain the seven sacred oils necessary for the Opening of the Mouth ritual which made it possible for the deceased to eat and drink in the afterlife. On the left wall there is a lists of names of offerings and the quantity offered in a handsomely organized graph. (Old Kingdom Egyptians had spreadsheets down pat for at least three centuries by the time these tombs were built.) Next to the list is a false door with depictions of offerings including meat, birds, bread, vegetables, roses, milk and beer. Other scenes show incense balls, copper burning incense, head rests and the necklaces worn by priests during the performance of these rituals. Sabi’s tomb has similar paintings of the offerings and the list.

Human remains were found inside both burial chambers, but they were scattered about and there were no sarcophagi, the result of looting in antiquity, probably in the waning days of the Old Kingdom during the 7th or 8th Dynasty. The tombs weren’t completely emptied of artifacts by the thieves. Archaeologists found some funerary tools, alabaster jars, pottery and some colored limestone offering models.

The paintings and artifacts indicate Ankh Ti and Sabi were involved in mummification and funerary rituals as part of their priestly duties. The decoration of their tombs and the accessories buried with them were chosen to reflect the work they did in life. 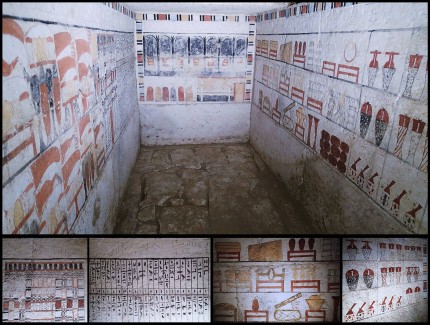