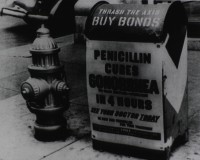 Since Alexander Fleming first noticed that the Penicillium mold that had accidentally contaminated his petri dish was lethal to the Staphylococcus bacteria inside it in 1928, humans have become accustomed to a world where infections can be cured with no more effort than having to swallow a few uncomfortably large pills for a week. The days when a scraped knee could kill seem like ancient history, but they’re not. Bacteria have become increasingly resistant to the antibiotics in the medical arsenal and with very few new antibiotics discovered over the past two decades, the prospect of a world of infectious microbes we cannot kill has become a terrifying reality. According to the CDC, 23,000 people a year die from antibiotic-resistant bacterial infections.

Even Fleming knew the antibiotic gravy train ran on unstable tracks. He noted in the official Nobel Lecture (pdf) he delivered in the days leading up to the ceremony awarding him the 1945 Nobel Prize in Medicine: “It is not difficult to make microbes resistant to penicillin in the laboratory by exposing them to concentrations not sufficient to kill them, and the same thing has occasionally happened in the body.” The bacteria that survive the antibiotic onslaught and their descendants develop resistance to that antibiotic. If any survive the next antibiotic deployed against them, they become resistant to that one as well and on and on through the entire pharmacopoeia.

That’s how Methicillin-resistant Staphylococcus aureus (MRSA) bacteria came to set up shop particularly in hospitals because MRSA laughs at our puny human doctors with their losery old penicillins and amoxicillins. The rate of MRSA infections at US academic hospitals doubled between 2003 and 2008, and since there hasn’t been a new class of antibiotics discovered since the 1980s, MRSA and other drug-resistant bacteria are only getting stronger.

The potential disaster here is so far-reaching it’s hard to grasp. It’s not just pneumonia and injuries that used to be easily treated that will become many times more fatal. Cancer treatment, organ and device (mechanical knees, hips, etc.) transplants, dialysis, open-heart surgery, any surgery at all, for that matter, including plastic surgery, even getting tattoos all rely heavily on antibiotics to keep patients alive. See the World Health Organization’s Antimicrobial Resistance: Global Report on Surveillance (pdf) to learn more about the post-antibiotic apocalypse we’re facing.

Scientists all over the world are looking for new drugs to combat the rise of superbugs, among them a team from the University of Nottingham who have taken an approach so old it’s new again. The brain child of Dr. Christina Lee, an Anglo-Saxon expert from the University’s English department, the study tested the efficacy of a recipe for a salve to treat eye infections found in Bald’s Leechbook, a collection of remedies for illness written in Old English around 950 A.D. in Winchester that is now in the British Library. Here is a translation of the recipe in volume two of Oswald Cockayne’s outstandingly titled Leechdoms, Wortcunning, and Starcraft of Early England, published in 1864-6. (I need to integrate “wortcunning” into my daily vocabulary.)

Work an eye salve for a wen, take cropleek and garlic, of both equal quantities, pound them well together, take wine and bullocks gall, of both equal quantities, mix with the leek, put this then into a brazen vessel and let it stand nine days in the brass vessel, wring out through a cloth and clear it well, put it into a horn and about night time apply it with a feather to the eye; the best leechdom.

No disrespect to Oswald Cockayne and his mastery of the catchy book title, but his translation needed updating for use in a scientific context. Dr. Lee translated the recipe from the original manuscript, researching ambiguous words for optimal accuracy. Researchers, led by microbiologist Dr. Freya Harrison, were meticulous in recreating the recipe as faithfully as possibly, even securing the wine from a vineyard that is known to have been in use in the 9th century. They made four batches of the salve and a control batch without any of the vegetable ingredients, then applied Bald’s salve to well-established MSRA cultures (with a dropper, not a feather) and waited for 24 hours before counting the surviving bacteria.

The team made artificial wound infections by growing bacteria in plugs of collagen and then exposed them to each of the individual ingredients, or the full recipe. None of the individual ingredients alone had any measurable effect, but when combined according to the recipe the Staphylococcus populations were almost totally obliterated: about one bacterial cell in a thousand survived.

The team then went on to see what happened if they diluted the eye salve – as it is hard to know just how much of the medicine bacteria would be exposed to when applied to a real infection. They found that when the medicine is too dilute to kill Staphylococcus aureus, it interfered with bacterial cell-cell communication (quorum sensing). This is a key finding, because bacteria have to talk to each other to switch on the genes that allow them to damage infected tissues. Many microbiologists think that blocking this behaviour could be an alternative way of treating infection.

Bald’s onion and bile salve, it turns out, is an MRSA-killing machine.

Dr Harrison commented: “We thought that Bald’s eyesalve might show a small amount of antibiotic activity, because each of the ingredients has been shown by other researchers to have some effect on bacteria in the lab – copper and bile salts can kill bacteria, and the garlic family of plants make chemicals that interfere with the bacteria’s ability to damage infected tissues. But we were absolutely blown away by just how effective the combination of ingredients was. We tested it in difficult conditions too; we let our artificial ‘infections’ grow into dense, mature populations called ‘biofilms’, where the individual cells bunch together and make a sticky coating that makes it hard for antibiotics to reach them. But unlike many modern antibiotics, Bald’s eye salve has the power to breach these defences.”

It worked in vivo, too, on mice with MRSA-infected skin wounds at Texas Tech University.

As promising as this study is, it’s still in the early stages. The AncientBiotics program is crowdfunding to hire a summer intern to help them move forward briskly with this incredibly exciting research. They just reached their goal of £1,000 so they’ll definitely get funded, but given the modesty of the original goal and the global importance of this project, I’d love to see them raise a lot more than that. There are 26 days left in the fundraiser. Donate!