There are 38 historical markers in Lower Manhattan. None of them acknowledge the city’s massive debt to the slaves who literally built it. That will change this year because the city council has approved a marker on the site of New York’s first slave market at the corner of Wall Street and Pearl Street.

In 1627, a year after the Dutch West India Company imported the first 11 African slaves to New Amsterdam, slaves built the wall that Wall Street was named after. It started out as a defensive earthwork embankment along the northern boundary of the settlement meant to keep Native Americans from attacking the settlement, a Manhattan version of Hadrian’s Wall. When Governor Peter Stuyvesant ordered the construction of a more elaborate palisade wall spanning Lower Manhattan from the Hudson to the East River in 1653, slaves again formed the bulk of the work force.

The Wall Street wall came down in 1699. By then slavery had grown exponentially. The Dutch had imported slaves to do the hard work of clearing land for houses and farms, filling shore areas for docks and building roads that free Dutch immigrants refused to do preferring the easier and more lucrative route of the fur trade which allowed them to make money quickly and return home. When the English conquered the colony in 1664, they continued to rely heavily on slave labour as farmers, dockworkers and household servants. New Amsterdam was renamed New York after the Duke of York, the future King James II, who had received a vast swath of the newly conquered territories from his brother King Charles II. The good duke just happened to be the major investor in the Royal African Company which had the monopoly over English trade with West Africa, a trade which primarily consisted of the sale of human beings. James gave slave ships priority access to docks and warehouses in New York City. 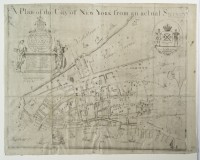 By 1703, slaves were found in 42% of the households in New York City, more than anywhere else in the north and second only to Charleston in all the English colonies of America. In 1711, almost 1,000 of New York’s population of 6,400 were black people, most of them enslaved. Their masters often sent them to make extra money by renting themselves out for short and long terms. All those slaves milling about, rubbing elbows with each other and free people of color without supervision, gave the powers that be agida, so on December 13th, 1711, the New York City Common Council passed an ordinance “Appointing a Place for the More Convenient Hiring of Slaves”

Be it Ordained by the Mayor Recorder Aldermen and Assistants of the City of New York Convened in Common Council and it is hereby Ordained by the Authority of the same That all Negro and Indian slaves that are lett out to hire within this City do take up their Standing in Order to be hired at the Markett house at the Wall Street Slip untill Such time as they are hired, whereby all Persons may Know where to hire slaves as their Occasions Shall require and also Masters discover when their Slaves are so hired and all the Inhabitants of this City are to take Notice hereof Accordingly.

It wasn’t just slaves for hire who were contained in the market at the corner of Wall and Pearl Streets. Market House — known as the Meal Market since 1726 when the city granted it exclusive rights to the sale of grains — was the first official slave market in New York City. People were bought and sold there for more than 50 years and the city taxed every sale, thus making New York City itself not just the beneficiary of slave labour, but an active participant in the trade.

Other sites in Lower Manhattan sprang up where slaves were traded, and by 1762, the Meal Market had become an eyesore to the elite who for decades had enjoyed the prosperity and convenience its human cattle provided them. They submitted a petition to the Common Council:

Said Meal Market greatly obstructs the agreeable prospect of the East River, which those that live on Wall street would otherwise enjoy. That it occasions a dirty street, offensive to the inhabitants on each side and disagreeable to those that pass and repass to and from the Coffee House, a place of great resort, that same be removed.

Heaven forfend anything spoil the view of the East River or sully the way to the Merchants Coffee House. The Council responded with alacrity. In February 1762, the Meal Market was demolished. Slavery was far from over in the city. Even after the Revolutionary War when slavery began to wane in the northeastern states, New York doubled down. In 1790, Philadelphia had a population of 28,522, 300 of them slaves. Baltimore which, like New York, was a busy port city but which unlike New York was in close proximity to the plantations of the south, had 1,300 slaves out of a population of 13,503. New York City, for the first time overtaking Philadelphia as the most populous city in the nation with a population of 33,131, counted more than 2,300 slaves among them.

In 1799, the state legislature passed a gradual emancipation law declaring children of slaves born after July 4th, 1799 free, but even that half-assed measure was only technical freedom. Those children had to serve as indentured servants to their mothers’ masters until they were 28 years old (for men) or 25 years old (for women). Slaves born before that date were still slaves until they died, but they would now be called indentured servants. On July 4th, 1827, black people in New York held a parade celebrating their official freedom, but the sad truth is there were still slaves in New York until the 1850s.

Despite the enormous role of slaves in the birth and development of New York City, the African Burial Ground National Monument is currently the only memorial that makes any reference to slaves in all of Lower Manhattan. The new marker

The new plaque may be unveiled on Juneteenth (the anniversary of the official announcement of the abolition of slavery in Texas by Union General Gordon Granger on June 19th, 1865, which has evolved into a wider celebration commemorating the abolition of slavery in all of the Confederate states), but the date is still up the air. The council hasn’t decided where exactly the plaque will be installed yet nor even the exact wording. Wall Street is swaddled in scaffolding at the moment; they need to pick a spot where the memorial will actually be visible.