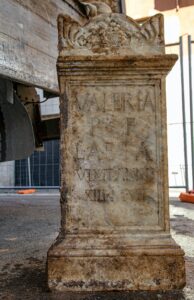 Utility works in Rome have discovered the 2nd century marble funerary altar of a young girl. It is intact and in excellent condition. The find was made during work on the water network on Via Luigi Tosti, the street a mile south of the Porta Latina gate in the Aurelian Walls where the terracotta dog bearing a startling resemblance to the Cowardly Lion was unearthed earlier this year.

Found 6.5 feet below road level, the altar is carved out of white marble. It is topped with a bas relief of two songbirds on each side of bunch of grapes or fruit basket. Stylized half acanthus leaves bracket

the pediment. Songbirds and fruits symbolized bounty and abundance and were common motifs in Greco-Roman funerary art, referencing the real garlands that would be draped on the exterior walls of temples and altars. The front of the altar is inscribed with a dedication to a daughter lost too soon.

The inscription records that the deceased, Valeria Laeta, lived only 13 years and 7 months. It’s not clear what the P stands for, but the convention suggests it was her father’s initial because the F stands for “filia” meaning daughter.

Fragments of a white marble sarcophagus were recovered next to the altar. It too was carved with an intricate relief depicting a lioness turning towards the horse rearing over her back (only the front two legs of the horse survive) while a hunting dog attacks her from the front. The fragment was part of a lenos, a tub-shaped sarcophagus echoing the troughs used to press grapes. Lenoi came to prominence in the second half of the 2nd century and elaborately decorated versions like this one were produced for the elite.

In the same trench was a small columbarium, a structure containing niches for cinerary remains. It is just 13 by 10 feet and built into a bank of volcanic tufa stone. Its walls are made of a concrete masonry core faced in opus latericium (brick cladding) of very high quality. The walls were then plastered and painted yellow and red to mimic marble slabs.

All of these elements were part of a larger complex of funerary structures built along the ancient Via Latina, one of the oldest Roman roads that led south from the Eternal City 125 miles to what is now Benevento, 30 miles north of Naples.