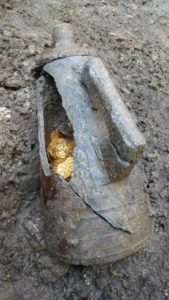 The hoard of gold coins from the last days of the Western Roman Empire that was discovered under an old theater in Como in 2018 has proven even more exceptional than it seemed at first glance. And that’s saying a lot, because from the lidded soapstone pot to the tidy stacks of mint-condition 5th century gold coins inside of it, this find was immediately recognized as one of unprecedented historical significance.

When the news of the spectacular find was announced in September of 2018, archaeologists had recovered the vessel and begun the process of excavating it in laboratory conditions. They had removed 27 coins from the reigns of the Emperors Honorius (r. 384–423), Valentinian III (r. 425-455), Leo I the Thracian (r. 457-474) and his short-lived co-emperor Libius Severus (r. 461-465) and estimated there were about 300 in the whole hoard. They had come across one gold ingot and two objects of undetermined identity and expected to find more in the densely packed amphora.

Well, the painstaking process of removing one coin at a time from its tight, tidy stacks is now complete, and the final tally of gold coins is 1,000. Exactly 1,000. Someone had to have counted this out for professional purposes, like an accountant, government administrator or imperial goldsmith. The vast majority of the coins — 639 of them — were struck by mint in Mediolanum (modern-day Milan) which was then the capital of the Western Empire. They were minted between 395 and 472 A.D. and bear representations of eight emperors and four empresses. The fall of the Western Roman Empire is traditionally dated to the deposition of Emperor Romulus Augustulus in 476 A.D., and 744 of the coins were minted after 455, so literally the last two decades of the empire.

In addition to the coins, the treasure contains the raw materials for and products of the highest quality goldsmith work. There are three large gold rings, believed to be men’s rings, one octagonal, one set with a huge cabochon garnet of superb quality, and one with an unusually intricate combination of basket weave and filigree techniques. There also are three earrings (one pair and an unfinished singleton). The production side of the business is attested to by an ingot, a gold bar, and thin gold threads. The ingot is alloyed with silver to make it more durable for jewelry and it has been cut and broken from bits of being used to make precious objects.

All told, there are 11 pounds of gold in this hoard, an almost inconceivable amount of portable wealth at a time when the imperial economic systems were moribund. The amphora it was crammed into, on the other hand, was a modest object of everyday use. It’s a jug not dissimilar to a beer stein that was locally produced of green soapstone. It has char marks indicating it was used in cooking. Pliny referred to cooking vessels being made of soapstone in the Como area (Natural History, XXXVIL 44), and they are still manufactured there today.

This video shows the jug and goldsmith materials, including a fantastic close-up of the garnet.

This video focuses on the jug, but around the 3:40 mark you can see the coins being removed one at a time with tweezers during the conservation process.