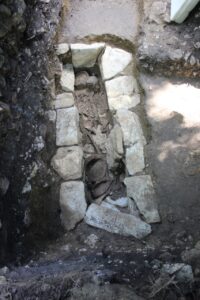 The burial of an elite woman has been discovered at the Archaeological Zone of Palenque, Chiapas, Mexico. It is a cist grave 7’2″ long and two feet wide, lined and covered with heavy stone slabs. The grave contains three pottery vessels (two almost complete, one in pieces) left as offerings which tentatively date the burial to between 750 and 850 A.D., the Late Classic Maya period.

Preliminary osteological analysis indicates she was between 25 and 30 years old when she died. She had green stone inlays on several of on her teeth and her skull had an oblique tabular deformation produced by pressure of a hard object against her skull when she was a baby. Both green stone inlays and the intentional cranial deformation were exclusive to the Maya elite.

The location of the burial near the center of the archaeological site also indicates she was someone of status in the community.

“We can say that the space where we found it must have housed platforms with constructions of perishable material, which gave access to the main spaces of the city, such as the Ball Court or the Great Palace Plaza and the Temple of the Inscriptions”, [head of the Palenque Archaeological Project] Arnoldo González points out.

The grave typifies the funerary practices in use in pre-Hispanic Palenque. The cist is oriented to the north, while the woman’s face was turned towards the east.

“Although there is no consensus among archaeologists,” says Arnoldo González, “it is believed that this position of the face is symbolically associated with the rising of the sun. In such a way that it would allude to the rebirth of the character in the company of the sun, whose transit also begins in the east”.

Archaeologists from Mexico’s National Anthropology and History Institute (INAH) unearthed the tomb last week in an area of the site where new sanitary services are being installed. To protect the fragile context until the excavation is complete, INAH quickly moved to cover the burial to prevent damage from the sudden temperature changes in Palenque. The bones have been removed to the on-site archaeological materials warehouse for cleaning and analysis.