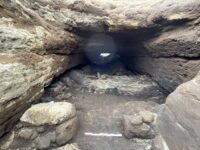 A man-made cave near Oddi in South Iceland is much older and larger than archaeologists initially realized. An analysis of the layers of volcanic tephra revealed that the caves were created in the middle of the 10th century, not in the early 12th century as previously believed.

The first of the caves was discovered in 2018 and then a second larger one was found to be connected to it. The current research team has been excavating the caves since 2020. The larger cave of the two was collapsed, forcing archaeologists to dig deeper to get access to the cave in the safest possible conditions in a challenging environment with crumbling sandstone walls. So far it has only been partially opened. 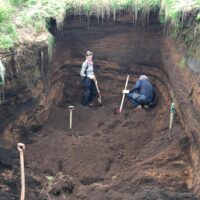 The investigation into the cave system is part of a larger exploration of the literary culture that thrived in Oddi during the 11th and 12th century. The Oddverjar clan who lived there were famed as historians, poets and authors of some of the most important Norse sagas, including the Heimskringla. There may even be a direct reference to the caves in one of those sagas.

Kristborg says that the cave currently being excavated may possibly be Nautahellir, Bull Cave, which is mentioned in Jarteinabók Þorláks Biskups (Bishop Þorlákur’s Legends of Saints), which dates back to 1210 – 1250. The manuscript relates how Nautahellir collapsed with 12 bulls in it. One was then rescued from the rubble.

“Although it’s older than that, it’s likely that [the cave] was used for livestock,” explained Kristborg. “Whether it was for that specific bull, we don’t know. But the history of its use obviously goes back further than we’ve managed to trace yet.”

The caves at Oddi have a complex and fascinating story to tell, says Kristborg, but the scope of the current investigation is such that she and her team need to keep their focus narrow. “These are huge structures and an unbelievably large system of caves that we’re only just starting to come to grips with. […] We’d need to undertake a much, much larger study with a much bigger crew in order to get to the bottom of this and trace this history in full, the history of these caves’ use.”

Here is a 3D scan fly-through of the cave: