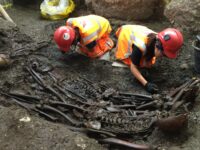 The mass burial unearthed during the excavation of the burial ground of the former Bethlehem Hospital, aka Bedlam, did not contain the remains of the victims of the 1665 Great Plague of London as initially thought. They were felled by an earlier outbreak of Bubonic Plague in the 16th century.

Excavations in advance of construction of a new subway station on London’s Liverpool Street began in 2015. Archaeologists knew it was the site of Bedlam’s burial ground and expected to find at least 3,000 bodies there. The cemetery had been in active use from 1569 to at least 1738. It was the first burial ground in London with no affiliation to any church or religious institution, so not only were patients who died at the hospital buried there, but also Londoners who could not afford churchyard burials and those who chose to be buried there for religious or political reasons. Once the hospital moved, the burial ground was used by the city as an overflow cemetery when the other city cemeteries were filled up during times of rapid death, like when London was struck by plague.

The dig ultimately recovered the remains of 42 individuals closely packed together in the mass grave. Contrary to popular “Bring out yer dead” tropes of plague victims tossed hastily into pits, these people had been buried with respect, many of them in wooden coffins, the others carefully stacked.

A headstone found near the pit was engraved with the date 1665, so archaeologists thought the pit contained the remains of victims of the Great Plague of 1665, the last and largest outbreak of Bubonic Plague in London that claimed the lives of 100,000 people, a fifth of the city’s population. Other burials in the Bedlam cemetery were temporally staggered and individual. The mass burial of 42 bodies in one day strongly indicated a catastrophic event like a battle or fatal infectious disease.

Scientists at the Max Planck Institute in Germany successfully extracted DNA from the teeth of 20 of the 42 skeletons. Five of the samples contained traces of the plague bacterium Yersinia pestis. The plague left no marks on bones, and because the bacterium dies as soon as it has killed its host, its DNA usually degrades over centuries. The Y. pestis found in those five skeletons were the first examples of 17th century plague ever found in Britain.

Except not quite, as it turns out.

[According to Michael Henderson, senior human osteologist at the Museum of London Archaeology,] “Five of these people had been exposed to plague when they were alive. It is highly likely they died of plague in the 16th century and, prior to that, 16th-century plague had not been identified genetically in the UK so that was quite a big achievement for us. It’s the first evidence of that kind in the country, although we can’t pinpoint the exact year.

The skeletal remains of the plague victims and the 4,000 other bodies unearthed in the Bedlam dig will be reburied with dignity in consecrated ground, just as they were buried the first time.