We haven’t known a great deal about Darwin’s college days because all we’ve had in the way of evidence are a registration record or two.

But this year, the 200th anniversary of Darwin’s birth and 150th anniversary of the publishing of On The Origin of Spieces, Honorary Keeper of the Archives and Fellow Commoner, Geoffrey Thorndike Martin, uncovered six financial ledgers from Christ’s College, Cambridge, which include Charles Darwin’s itemized expenses.

They show that Darwin, who studied at Christ’s College between 1828 and 1831, lived the life of a 19th century gentleman and paid people to carry out tasks such as stoking his fire and polishing his shoes. […]

The books also contain accounts for the barber, chimney-sweep, apothecary [pharmacist], porter, brazier [who looked after the fires], glazier, hatter, laundress, linen-draper and painter, among others.

Back then, students purchased goods and services on account and the merchants applied to the college for payment. Then the college just billed the students for these expenses along with its own charges (ie, tuition) on a quarterly basis.

So now we know that the young Charles Darwin spent more on shoes than he did on books, and that he paid extra for a serving of vegetables with every meal. (The default rations were a joint of some sort of meat and a pint of beer. Srsly.)

The bills have been digitized and made available to all comers on Darwin Online. I get errors when I try to load the images and text on the site itself, but the pdf files work just fine. They’re image rich and high resolution, though, so they take a while to download.

It’s called “Poodle With Bow, On Table” and is at least one of the oldest, if not the oldest. It’s a daguerreotype from the 1850’s, photographer (and model) unknown.

Look at the cuteness:

How did they get that poor creature to sit still for the ages it took them to take a picture in the 1850’s? It must have been heavily sedated.

This photograph is one of thousands going on the auction block next Monday at Sotheby’s New York. There are some extremely famous names among the artists, including the likes of Ansel Adams, Robert Mapplethorpe, Imogen Cunningham, Alfred Eisenstaedt and Edward Henry Weston.

Last year Sotheby’s sold an Edward Weston photograph for $1.6 million. The estimates for his lots this time around are far more modest, ranging from 5,000 to 30,000 dollars.

The highest estimate — $200,000 – $300,000 — goes to a László Moholy-Nagy portrait of Lucia Moholy, an extremely well-known photograph considered part of the artist’s seminal oeuvre.

You can browse the entire Sotheby’s sale — and it’s worth it — here.

Iraq is suffering the worst drought in decades, and as the waters of the Euphrates recede, ancient ruins are surfacing for the first time since Saddam Hussein dammed the area in the mid-1980’s.

Ratib says that at least 75 archeological sites had been partially excavated before the area was flooded. They ran the gamut of civilizations — from 3,000 B.C. to the Sumerian and Roman periods. Ancient Jewish settlements were also submerged in the area. But because of the receding waters, Ratib has been able to access some sites for the first time — including, for instance, a cliff with a series of pre-Christian tombs carved into its face. Though they have been heavily damaged by the water, Ratib says they still have value. […]

But it’s not only previously discovered archaeological sites that the drought has made accessible.

Ratib and a colleague are suddenly excited by something they’ve seen on this particular day. They kneel next to what looks like an old stone wall, shards of pottery everywhere. Ratib says he believes it is a Roman-era irrigation ditch.

“I’ve never seen this site before,” he says. “When we excavated this area decades ago, this was all buried underneath the soil, but the receding waters uncovered it.”

Unfortunately, these discoveries come at the expense of local farmers and fisherman, who deprived of their normal income, have a strong incentive to loot the newly reveled sites.

It’s unlikely that Baghdad will be able to finance reasonable protection of the sites, never mind further excavations. There are 10, count them, 10 guards assigned to protect the entire Anbar province. This does not bode well.

A 17th c. wooden bust of St. Innocent stolen from Santa Maria degli Angeli alle Croci in Naples in November of 1990 has been found in a private home in Charlotte, North Carolina.

Officials from the US Immigration and Customs Enforcement agency have seized the statue and will return it to Italy this month.

Two years ago, authorities in Rome contacted U.S. Customs and Enforcement officials with information that an Italian citizen had sold a similar wooden statue to an antiques dealer from Greensboro.

ICE tracked down the buyer as the owner of Caroline Faison Antiques, which specializes in 17th-, 18th- and 19th-century antiques. She purchased it at an antiques fair in France, Johnson said. […]

ICE contacted Johnson last year to see if she recognized pictures of the stolen items. She said the paint was almost gone, but she recognized the form of the bust.

When she realized it was stolen, she said she immediately bought the statue back from her customer and gave it to federal agents. Johnson said she did not get her money back from Faison, nor did she ask.

Good on her, although I can’t help but point out that if she’d actually cared to demand any kind of provenance, she could have been part of the solution right up front instead of feeding the problem.

It’s an unusual case because most of these stolen artifacts end up sold in major cities like New York. It’s also unusual in that it was found at all after so much time.

The bad news is that the bust has not been well-treated over the past 20 years. The head was lost somewhere in the voyage between Italy and France, where it was first purchased by Caroline Faison Antiques. A cross St. Innocent used to carry is also gone, as is much of the gold paint.

Santa Maria degli Angeli alle Croci will surely be delighted to have him back on the altar, even the worse for wear.

It was discovered in pieces in a tomb next to King Tut’s in the Valley of the Kings three years ago. Archaeologists have painstakingly put the puzzle together so now we can see the entire bed as it was when it was used 3,000 years ago. 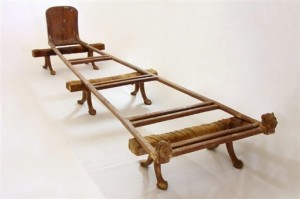 The bed, featuring carved heads of a lion and a lioness at its foot, slopes downwards five centimetres (two inches) from head to toe to help drain bodies being prepared for mummification. […]

Luxor antiquities director Mansour Bouriq told AFP that unlike most beds found in tombs, this one was not ceremonial but actually used for embalming.

“We believe this was a room used for embalming because we found some embalming materials, including herbs, oils and pottery vessels,” he said.