The carcass of a juvenile woolly mammoth, soft tissues beautifully preserved by the Siberian permafrost, was examined by an international team of scientists at the Russian Academy of Sciences in Yakutsk who found evidence that the animal was brought down by apex predators — probably lions — and then poached by the apexest of all predators, MAN. If the initial findings are confirmed, this will be the first mammoth carcass with preserved soft tissues ever found that bears evidence of interaction with humans.

The mammoth, nicknamed “Yuka,” was discovered frozen in the ice near the Arctic Ocean by mammoth tusk hunters. Bernard Buigues of the scientific exploration organization Mammuthus acquired the carcass for scientific research, keeping it from being sold to private collectors. Experts found by analyzing the teeth that Yuka was about two and a half years old when it perished at least 10,000 years ago. Radiocarbon dating is ongoing; once it’s done, we’ll know if it died 10,000 years ago or much earlier.

Although large parts of the animal are missing courtesy of predators, much of Yuka’s soft tissue is in remarkably good condition. The foot pads, trunk, swaths of skin and ginger fur are so intact it could almost pass for a fresh kill. 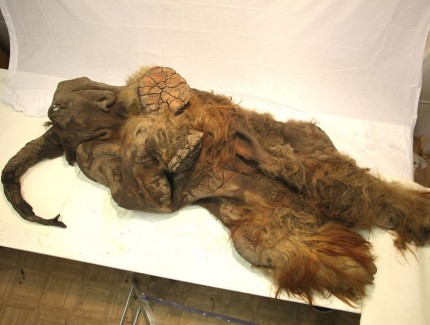 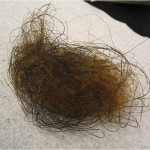 That red fur is in and of itself exciting. It’s very long and lighter than other mammoth pelts that have been discovered. In 2006, University of Manitoba scientist Kevin Campbell published the DNA sequence of mammoth hemoglobin. He also found genes that could have been for lighter hair. Campbell is excited to find a mammoth with preserved light hair because if DNA is successfully extracted from Yuka, researchers will have a chance to match the DNA sequence with the light hair phenotype. (The picture on the right is an example of the more common darker hair found on mammoths, from this entry from 2008.)

Healed scratches found on the skin indicate a lion attack that Yuka survived earlier in its relatively short life.

However, similar deep cuts that had not healed suggest a subsequent lion attack that either caused or happened very near the time of Yuka’s death.

Also, when moving one of Yuka’s legs, Professor Fisher recognized evidence of a freshly broken leg when it died and suggested this may have occurred as Yuka tried to flee from attackers.

The lions in question (Panthera leo spelea) are an extinct subspecies of the African lion, known commonly as Eurasian cave lions but were present at the same time as the mammoths.

“Did we know lions hunted mammoths? Well, we guessed they did. But could we ever have expected to see such graphic evidence? No – but here it is,” explained Professor Fisher.

Lions hunt baby elephants in Africa today, but after taking them down they eviscerate their prey, eating through the belly. Yuka doesn’t appear to have been gutted, lion-style. Instead, there are marks that indicate tool-assisted butchering.

This includes a “long, straight cut that stretches from the head to the centre of the back” as well as “very unusual patterned openings” into the skin and “scalloped margins” on the upper right-hand flank.

The skull, spine, ribs and pelvis were all removed from Yuka’s body, but the skull and pelvis were found nearby. However, most of the spine and three-quarters of the ribs are missing.

Each scalloped mark on the skin is made up by 15-30 small, serrations that “could be the saw-like motion of a human tool” and there are “some quite striking cut marks” on the leg bones, according to [University of Michigan environmental science professor Daniel] Fisher.

The scientists interrogated the tusk hunters who found the carcass to see if they might have made the cuts. They deny it, and it wouldn’t have been in their financial interest to slice and dice a salable artifact. There are still people today who poach prey from lions, so it’s not an outlandish proposition, by any means.

A documentary film crew recorded Yuka’s recovery from the tusk hunters and the subsequent examination at the Academy of Sciences. Woolly Mammoth: Secrets from the Ice debuted yesterday on BBC Two in the UK. It will air at a future date to be determined on the Discovery Channel in the US. Here’s a clip: